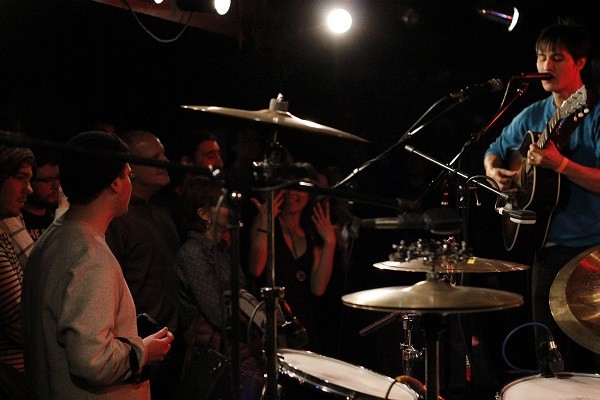 A sold out crowd at The Space in Hamden, CT is always a special affair. It consists of a hoard of people, all ages, muscling their way toward’s the stage in the basement venue. People standing on benches, getting a wider view from the stairs, and sneaking to the side of the stage are just a few ways you know the house is sufficiently packed. The Dodos and Springtime Carnivore received this sold out treatment last Saturday night and fully satiated the large audience.

If you still find yourself suffering from a wicked bout of Winteritis, you can find a remedy in Springtime Carnivore, the project of singer/guitarist Greta Morgan. Her entire self-titled debut album will launch you in a nostalgic trance, reminiscing about your fondest spring and summer memories. Morgan’s sweet, dreamy vocals were on fire throughout the set, and as she closed the set with her full band and a performance of “Name On A Matchbook”, an impossibly catchy tune that is gaining momentum and pinging on the indie pop radar.

Given that they are a guitar and drum duo, The Dodos offer up an astonishingly complete sound. The complexity of Meric Long’s guitar and the nonstop percussive thumping from Logan Kroeber on drums combined to a simple form of indie perfection. On tour in support of their most recent release, Individ, they proudly tore through new tunes like “Competition” and “The Tide”. And of course, if you are The Dodos, there is absolutely no way of escaping a set without playing “Fools”, the classic stomp of a tune from their album Visiter. Long reminded everyone that no matter how much he tries to avoid it, the band ends up giving in.