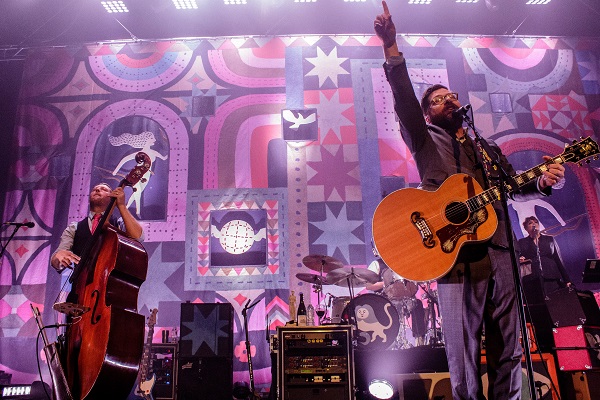 When Colin Meloy took the stage at College Street Music Hall last week sipping on red wine and getting a read on his surroundings, you could just tell that some brilliant things were about to happen. In one of the first high profile indie shows at the infantile New Haven venue, The Decemberists charmed the packed house with a delightful assortment of tunes from all throughout their discography.

The showmanship of the band, and Colin Meloy in particular, is absolutely top notch. He came across as shy and awkward but didn’t hesitate to play around with the audience. Early applause at the end of “July, July!” only made him extend the song with some extra interruptions from his guitar. He also went from section to section and gender to gender to get everyone in the venue singing along with the “la de da de da’s” of “16 Military Wives”. And he even played some clapping Simon Says-ish game with us taking the concept of a slow clap to a new level.

A tapestry inspired by the album art for their seventh studio album, What a Terrible World, What a Beautiful World, served as the stage backdrop for the show. The band performed a handful of tracks from that offering, headlined by their brand new hit “Make You Better”. They touched up on most of their albums, playing everything you’d want to hear from “The Legionnaire’s Lament” to “O Valencia!” to “Down By The Water”. The visual highlight of the whole night was when they closed the show with “The Mariner’s Revenge Song” and the band got eaten alive by a giant cardboard whale on stage.

For me, the strongest part of the set was the first encore when the band nailed a cluster of songs from Hazards of Love. They rolled through at least six tracks from the album including one of my all-time favorites in “The Rake’s Song”. It was the most instrumentally complete portion of the whole set, and many of the tracks cut even deeper live than they do on the original album, and it flowed beautifully. The bottom line here is that a live show from The Decemberists is a magical experience that every indie folk fan should get a chance to be a part of.

Let’s not ignore the opening set from Lady Lamb either. Aly Spaltro’s project has been a mainstay in the Connecticut scene for years now, going back to her days as a “beekeeper”. It was great to see her transition from the tiny basement of The Space to College Street Music Hall which is at least six times larger in size. She’s been out and about with her full band supporting her March LP release After. It was great to see the support she had as I caught plenty of fans singing along to songs other than “Billions of Eyes”, her most radio friendly tune from the album.