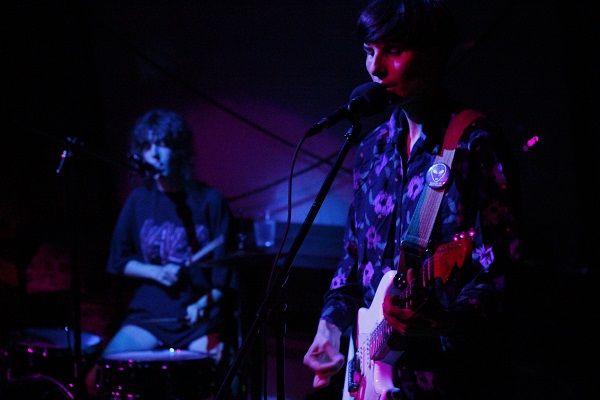 One of the things I enjoy most is hearing genres of music stand the test of time. Last Wednesday at BAR in New Haven, I was able to hear that shoegaze and old school girl-led punk pop both still sound strong. Canadian trio, The Courtneys headlined with support from the noisy Stagnant Pools from Indiana. Also on the bill was Stamford’s Jacques Le Coque.

Unfortunately, I arrived too late to catch the first opener, Jacques Le Coque. It would have been nice to see their live set; their excitable, antsy garage punk must translate well to a live stage. Hopefully they’ll be in the area again soon.

I did make it in time for the noisiest part of the evening. Bloomington, Indiana’s Stagnant Pools took the stage second. It is a two-man operation comprised of brothers Doug and Bryan  Enas. Drawing inspiration from drone-heavy guitar bands of old, the duo is part of a progressive, but generation-bridging musical movement that is keeping shoegaze alive. The acoustics at BAR catered to their noise rock nature, as it felt like high tide and giant waves of guitar fuzz crashed down from the stage.

With a classic sort of energy about them, The Courtneys headlined the evening. Their all-girl garage pop is ripe, perfectly in season as things turn to summer. Hailing from Vancouver are Courtney Loove, Sydney Koke, and Jen Twynn Payne. Together they are a throwback to fun, 90s pop rock. Doubling up on drums and vocals, Jen brought the spunk in large doses. The marriage of their vocals and instrumentals came together to remind me of a watered down Le Tigre meets a much more upbeat Joy Division. The ups and downs and the attitude of “Manion” stood out in what was a very complete set.

Check out the full photo set from the show.