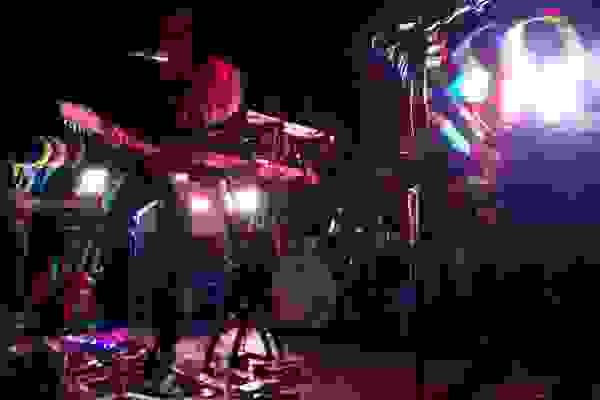 During one of the first snowfalls of the new year and a mere few days before the eight-inch blizzard that closed the city, Rough Trade hosted some of our friends from the north, The Besnard Lakes & USA out of Vietnam. The crowd was energetic and very eager to hear new music from both of the bands and some old favorites from ‘Lakes. Folks as far away as Florida helped fill the venue with a noted fantastic great atmosphere for this type of droning, alternative music.

Starting off the show USA Out Of Vietnam enveloped the crowd with their heavy hitting chords and ambient vocals. Slow drives and stark choruses cleaved their songs into clean sections and managed to musically control the crowd. Lasting an average of six minutes per song their creativity was free to explore every inch of atmosphere they created. Never wasting a note, all five members were able to come together and bring everyone to an altered state.

Feeding off the energy and good vibes from the opening act, The Besnard Lakes took the stage to a flurry of applause. Their style, notably more refined, had a different and eclectic aura. Some chords and riffs were reminiscent of more straightforward rock from decades past, all meshing together with punk, ambient tones and furious rock-out sections. The most memorable elements of the performance were the strobe light panels behind each member of the band which pulsated changing colors and brought the audience into a trance-like state. A true exploration of their musical catalog and some fantastic crowd participation made this a fun show to be a part of.

USA Out of Vietnam

Tagged: rough trade, the besnard lakes, usa out of vietnam