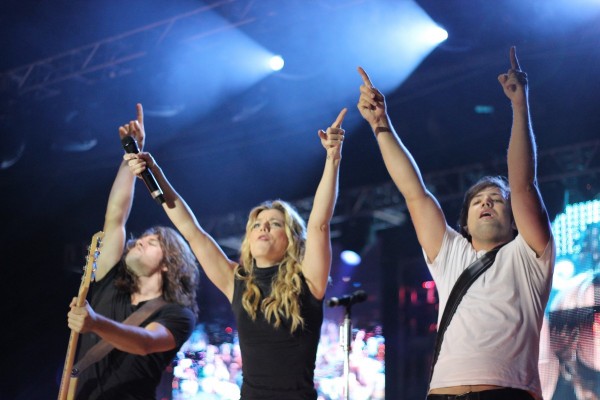 We talked briefly about the reggae scene on Long Island a few weeks ago when Matisyahu, Bally-hoo!, OogeeWawa, Soul Junkies and far too many others played the Pennysaver Amphitheater. We returned to the outdoor venue to bask in another rising genre.

Although a look at the local music scene may show little in terms of stand out musicians, country music is escalating in popularity among all age demographics on Long Island. It has been clearly evident from the performances scheduled at the Pennysaver Amphitheater (Darius Rucker, Little Big Town and Kip Moore are just some of the shows scheduled for the remainder of the summer) and was very obvious from the flocks of people at The Band Perry on July 11, 2014.

The group is a trio comprised of siblings Kimberly, Neil and Reid who would certainly have a successful run as L’oréal spokespersons if given the opportunity. The group has released both LPs under their label, Republic Nashville. These two albums have been certified platinum and gold respectively with their latest single, “If I Die Young” certified quadruple platinum. While this single was certainly the much anticipated closer of the evening, the group’s most defining, noticeable characteristic is their on-stage chemistry, the “arena-esque” stage set and touching renditions of timeless American classics like its National Anthem and God Bless America.

Below is some photos of the nearly sold-out performance. The group comes back to town when they open for Blake Shelton at Madison Square Garden next Friday.