!!! @ The Ballroom at The Outer Space 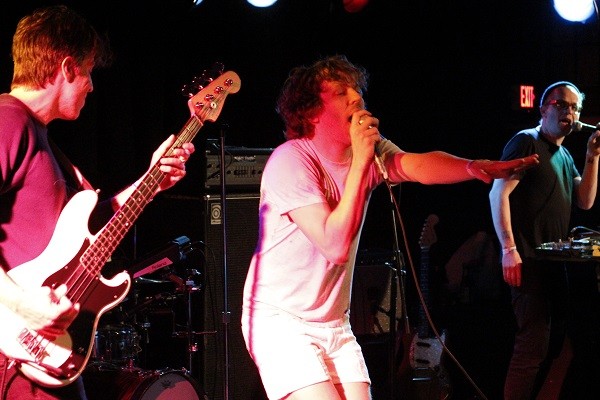 In the dance rock world, not too many bands get down like !!! (chk chk chk). They are the quintessential dance punk group, active for almost 20 years. Their live manifestation is a full blown dance party no matter what their spectatorship may be composed of. They returned to Hamden, Connecticut for the first time since mid-2013 and shared a great deal of new tracks in anticipation for a potential new album release later in 2015.

Before things got going, Brooklyn-based Darren Keen dropped some of his progressive beats to build up some momentum for the evening. His dark quirky electronic stylings made for a pretty cool 50 percent topless opening set. Loud beats and loud jewelry were undoubtedly a proper way to prepare for !!! even if it didn’t quite get bodies moving.

Rampant dancing ensued as soon as !!! began performing brand new tracks. Fans may have had no clue exactly what they were hearing for the first time, but there was no stopping them from visibly loving it. Vocalist Nic Offer frequented the dance floor to keep everyone attentive and didn’t run out of moves once during the set. In addition to the new material, the band performed slick grooves like “Slyd” and “Except Death” from their most recent release, Thr!!!er. Offer was pleased to play the audience-suggested “Yadnus” right before closing things out with old school staple “Heart of Hearts”. We are left only with the ability to look forward to the official release of new tracks and to hope to see !!! in this neck of the woods again this time next year.

Link to the full photo set