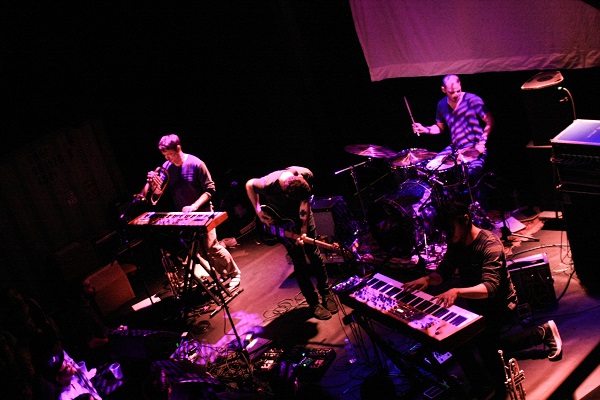 Williamsburg’s Rough Trade Records hosted The Antlers‘ record release show for their fourth album, Familiars, last week as part of their continuing series of tying live performances to purchases of new records. The Antlers are comprised of Peter Silberman on vocals and guitar, Michael Lerner on drums, and Darby Cicci on keyboards and brass, as well as a fourth member Timothy Mislock for touring purposes also on keyboards and brass. The Antlers are a sort of cross between post rock and dream pop, with the new album heavily featuring sultry smooth brass and as expected and greatly appreciated Silberman’s powerful expressive voice.

The Antlers played Familiars from front to back, opening up with the initially soft and sweet but slowly building “Palace“. The effect of live brass cannot be underestimated and as the two trumpets harmonized, the complex texture of the sound could truly be felt in the room and even made my hair stand up at one point. It was easy to see that the audience was gripped and immersed in the experience from the very first moment.

One of my favorite moments of the evening was the closing guitar solo of “Hotel“, which was very nicely embellished upon to include some interplay between the guitar and horns in such a way that had the whole crowd swaying along to the cyclical melody. Another shining moment for Silberman was during “Director“, which climaxes as Silberman bellows, “so you forgot your way, well I’m trying to remind you” with the most beautiful and effortless vibrato and most impressively, never hiding behind a falsetto. Immediately after this line, a very shoegaze-esque wall of swirling distorted guitar and synth builds and builds, getting louder and faster until abruptly yet elegantly coming to a halt, another excellent live rendition of an already solid song.

To be honest, I wasn’t quite sure how I felt about this album on a first listen, but after hearing it live, I’m sold. Familiars really showcases how The Antlers have matured and are beginning to incorporate more instruments and thus more complexity to their sound. Additionally, I couldn’t help but notice how they have somehow become even more polished since I saw them a few years ago touring Burst Apart. The Antlers will be back in New York on July 26th at Webster Hall.