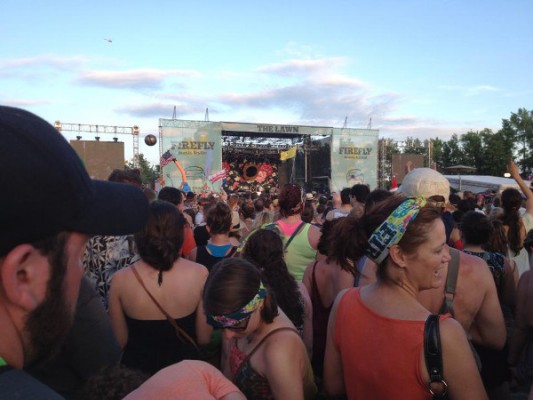 In the spirit of our preview of awesome artists playing Bonnaroo this year, I came up with a list of 10 artists that I know will be bringing down the house at Firefly Music Festival in Dover, Delaware. Here’s to a summer full of warm weather and great music!

Weezer
I’ve had the pleasure of seeing them open for Blink-182 a few years ago and boy did they blow me away. They are one of the best bands I have ever seen live. Unfortunately, their only other shows right now are south of us, making Firefly likely the closest opportunity to see the band play the hits from their eclectic discography.

American Authors
Seeing them open with A Great Big World for The Fray made me a fan of this pop group. Their energy and stage presence were undeniable and their songs are pretty catchy. It doesn’t hurt that they’re from Brooklyn either. They are pretty awesome live, and just released an album last week.

The Lumineers
People everywhere rejoiced in the feel-good romanticism of 2012’s “Ho Hey”. With other catchy, heartfelt songs such as “Stubborn Love” and “Scotland”, The Lumineers are one of the bands returning to The Woodlands I’m most excited to see.  Firefly is their only upcoming show.

Foo Fighters
When I saw that Foo Fighters were one of the headliners I was sold. It was hard enough to read the rest of the lineup with such an iconic rock band on the roster. Dave Grohl is as much a powerhouse today as he was with Nirvana. I’m just hoping they play acoustic and electric versions of “Everlong”. Wishful thinking, I know.

Tegan and Sara
These lovely ladies are kicking ass and taking names in 2014. You’ve probably heard songs like “Closer” and “Back in Your Head” ,but these Canadian twins are more than just catchy singles. The singer/songwriting duo have been touring heavily since high school with a lot of awesome talent including Firefly alums like The Killers and The Black Keys. They have headlining gigs at Toad’s Place and Hammerstein Ballroom on June 22nd and 24th before supporting Katy Perry’s tour in Autumn.

Childish Gambino
The actor, writer (for 30 Rock) and stand-up comedian turned hip-hop musician is to be taken seriously. He’s a mix between Twista and Trey Songz, sporting an exceptional singing voice and fiery tongue on his most recent release Because The Internet. before Firefly, he’ll be performing at the end of the month at Hammerstein Ballroom. The show is sold out but those without tickets won’t have to go further than their DVR to check him out as Troy Barnes in NBC’s series Community.

Iron and Wine
Iron and Wine (aka Samuel Beam) is an American singer-songwriter originally from South Carolina. His raw vocals and sound are quite intoxicating. I’ll admit that his singing serenades me to sleep at night.  Check them out on 2007’s “Flightless Bird, American Mouth”.

Band of Horses
The Seattle-based band is best known for their solemn hit, “The Funeral”. Formed in 2004 by Ben Bridwell, their sometimes classified as somewhere between Southern Rock and Indie Rock. They’ll also be playing at the Newport Folk Festival in Rhode Island at the end of July.

Chance The Rapper
Chicago native Chancelor Bennett, best known as Chance the Rapper, is making big waves in the hip-hop world. Not bad considering Bennett is just twenty years old. He’s got a laid-back, jazzy vibe that supplements his fast spitting skills. He’s a good choice to round out the Firefly roster and take over Kendrick Lamar’s spot on the 2013 lineup. His most recent single, “Coco Butter Kisses,” features Vic Mensa and Twista.

Jack Johnson
With his smooth voice and cool vibes, this is one artist you can’t miss out on.This magic man of multiple talents (surfing and film making are just some of these) has the voice of an angel.  With songs such as “Sitting, Waiting, Wishing” you can’t help but sing and sway along. Grab a margarita and you have your perfect summer moment.

And of course, I have to mention Outkast. They weren’t part of the list but we all know the most exciting reunion to take place this year won’t disappoint.

Tickets for Firefly are still available here. If you’re feeling the pinch in your wallet but still have to go payment plans are available. There’s great music and amenities like breweries and wineries there too! Those still on the fence can check out our very lengthy Firefly playlist below.