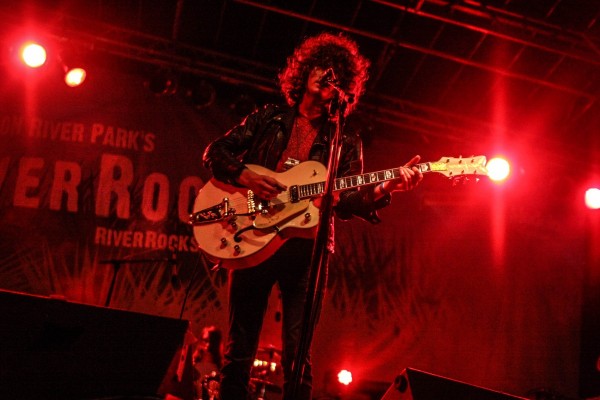 British psych rockers Temples made some waves early in 2014 with the release of their debut album, Sun Structures. Though the album, which reminisces strongly of 60’s and 70’s psychedelia, was well received here, we never really had any touring around its release. This show, closing out the free concert series Hudson River Rocks, was their first in the city this year. The warm Summer air, sunset and sea breeze set a fine environment for the music tonight.

Night had fallen by the time of Temples’ headlining set. The band are a quartet, featuring James Bagshaw (lead vocals/guitar), Adam Smith (guitar/keys/backing vocals), Samuel Toms (drums), and Thomas Warmsley (bass, vocals), all hailing from Kettering, England. The group’s instrumentation was solid, with a somewhat reserved but constant amount of energy. Vocal harmonies and guitarwork never hit a boiling point and made the performance a fairly comfortable one to absorb. We heard pretty much everything from Sun Structures, regrettably minus my personal favorite, “The Golden Throne“, which has always vaguely reminded me of Inspector Gadget.

Daylight was still in full swing as Spires opened the evening. Comprised of Matt Stevenson (lead vocals/guitar), Jack Collins (bass), Michael Goodman (synth/guitar), and Carter McNeil (drums), the Brooklyn based band have drawn frequent comparisons as an American counterpart to Temples. The sound is certainly similar, with them also dipping their toes well into the retro psych realm. The group’s two tracks online, “Candy Flip” and “Comic Book”, are a nice preview while we await a full debut.

As the sun shifted below the horizon, Here We Go Magic! took the stage. The band (Luke Temple, Michael Bloch, & Peter Hale) have been a little quiet following their 2012 record, A Different Ship, so to see them in action again was a welcome sight. Even more surprising was to see the return of bassist Jen Turner! The group didn’t play any new material, but were on point and then some with the performance. I’m really curious to hear just what they’ve been up to, here’s to hoping they make a big splash in 2015.