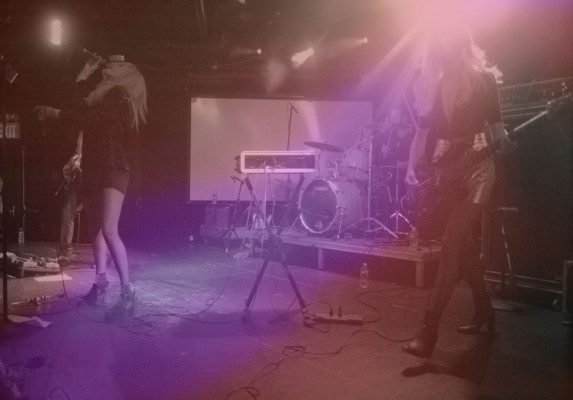 Physically, Tamaryn casually climbs the Le Poisson Rouge’s stage while mentally she appears to be fully immersed in the introspective mindset that she wrote Cranekiss within. It is her most personal album to date. Formerly associated with a more atmospheric tone in her debut album The Waves (2010) and in Tender New Signs (2012), the New Zealand born artist leaps into edgier terrain since relocating from San Fransisco to New York City.   The result is a rhythmic wall of sound that borders between post-shoegaze and chillwave with a dash of dance pop.

I found there to be something undeniably commanding about having two stellar women in the foreground who offered no apologies in their craft. Jennie Vee’s bass seemed to ebb and flow with the projected blurs of color that was cast behind the band and subtlety induced the crowd into a dream-like haze for the 45 minute set.

Let us not forget to digest the firecracker in the form of Samantha Urbani.  The former Friends vocalist ventured into solo territory, boasting progressive catchy lyrics infused by surges of electricity as Tamaryn’s opener. Urbani consistently made a point to engage with the audience and invite us into the fun of the set, going as far as placing her hand on my head while photographing her.  The band unlatched the stage with an energy that was downright contagious!  This alone would motivate me to keep tabs on her next moves, but it may also be the unique sound of a bandmate’s wind synthesizer that has kept me from closing out of her Soundcloud from my browser since the show last Friday.