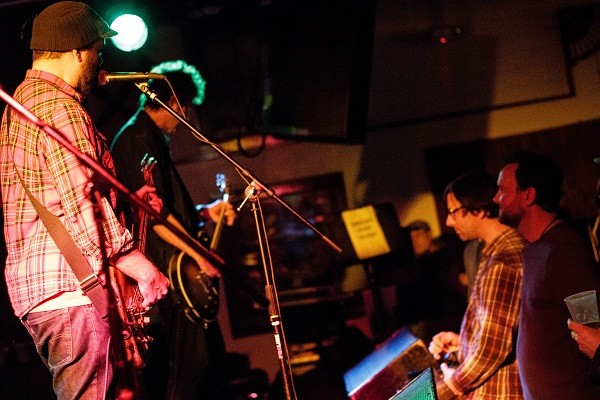 When I found out that Swervedriver was coming to Connecticut, I immediately began training my ears to accept an extra dosage of loudness. The legendary British shoegaze band dropped by Hamden, CT a few weeks ago and left an amazing impression coming off their first studio LP release since 1998. They succeeded in bringing enough noise and reverb to ensure that one pair of ear plugs was just not enough.

Swervedriver’s fifth studio album, I Wasn’t Born To Lose You, was released on March 3rd this year and picked up right where they left off before their major hiatus began after 1998. Their set list took the best of old school Swervedriver and combined it with their new material. They tore through “Song of Mustang Ford” like it was 1991 yesterday. “Duel” carried the same energy and timelessness.

With an endless supply of pedals at his disposal, Adam Franklin brought the distortion on guitar while supplying vocals. I found the new material to be more trippy and melodic, particularly “Autodidact”. “For A Day Like Tomorrow” utilized an echoing riff that would lead into an entrancing chorus. It is an outstanding welcome back for this band at a time in which we are seeing a resurgence in classic shoegaze from the likes of My Bloody Valentine and Ride.

A surprisingly fitting opener was found for this show in Gateway Drugs, who provided a great introductory to the show. Based out of L.A., their guitar sound came straight from 1990 and there was a great male/female vocal dynamic to support it. They brought the volume and didn’t necessarily seem noise rock driven. Check out their recently released Magick Spells LP if you want to get a better sense of their fuzzy, intense, genre blending.