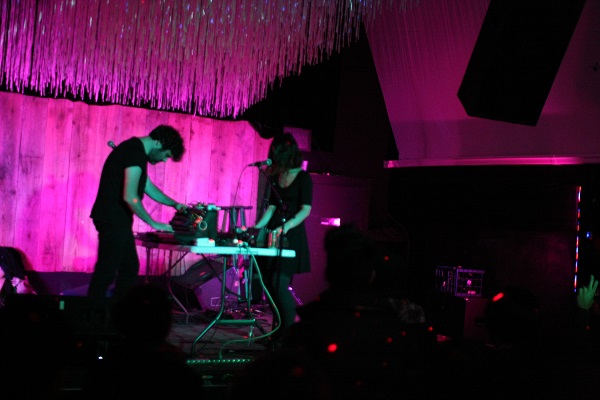 Spanish electronic duo SVPER hails from Barcelona, Spain and delivers tunes that will make any synthpop fan ecstatic. We managed to catch one of their post-SXSW shows at NYC’s Cameo Gallery last month. The performance consisted of Sergio Pérez and singer Luciana Della Villa facing each other with vintage analog keyboards on a table. They brought a particular kind of energy that reminisced of long Summer nights.

Before settling on their current band name, they used to be called PEGASVS, which happens to be the name of their debut album. At nine tracks long, PEGASVS is full of hypnotic sounds and catchy lyrics; it’s pure magic. The band just wrapped up some Canadian shows, and have headed back home to Spain. They will be active again at the Primavera Sound music festival, and are also at work recording a new album for Autumn. The first single, “Nuevo Cisne De Piedra“, offers an exciting peek into their thought process there.

Their performance was preceded by Brooklyn/Barcelona electronic act NOIA, which is the solo project of Gisela Fullà and plays as a trio live. NOIA is a bit more on the mellow side and was a good contrast for SVPER’s electrifying sounds.