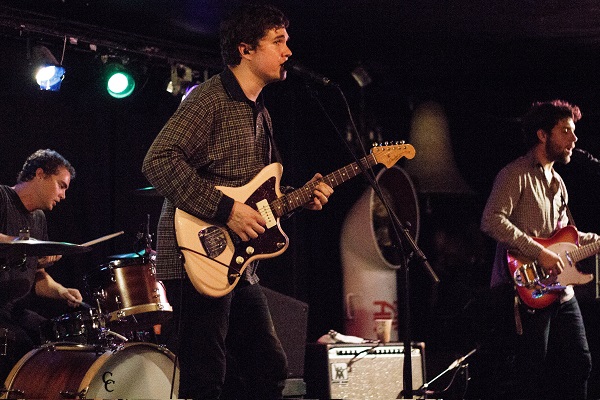 Surfer Blood may have just played The Space in Hamden, CT a year and a half ago, but following the May 2015 release of their third full length 1000 Palms, the Floridian outfit thought it would be a good time to return, sporting a slightly new lineup. Part of the lineup change was due to the absence of guitarist Thomas Fekete, who was diagnosed with a rare form of cancer earlier this year. Over $22,000 has been donated to his cause via a GoFundMe campaign.

Frontman John Paul Pitts dedicated “Take It Easy” to Thomas during their set, my favorite track of theirs, and it was cool thing to be a part of as Pitts took to the venue floor to sing to everyone. On a lighter note, the band played a handful of new tracks along with nearly every one of their older songs that I’ve been chronically listening to for years. “Swim (To Reach the End)” and “Demon Dance” always hit the spot for me.

As for the show’s support, Ski Lodge is a band I’ve seen live on several occasions, and this time it was a bit different. Amid a transitional period in terms of style, the band has introduced the keyboard to their live arsenal, having only utilized for a few shows prior. They’re on the verge of releasing some new music, having just dropped a new moody single called  “Heaven Is Now“. The indie pop band’s experimentation with synths sounds great so far. It was a treat, as always, when they closed out their set with “Just To Be Like You”.

I was also able to check another local Connecticut band off my “see live” list. Garage rock/surf pop trio Dr. Martino played a set full of frantic riffs and a series of instrument swaps between Simone Puleo and Amy Shaw who also both contributed vocals.