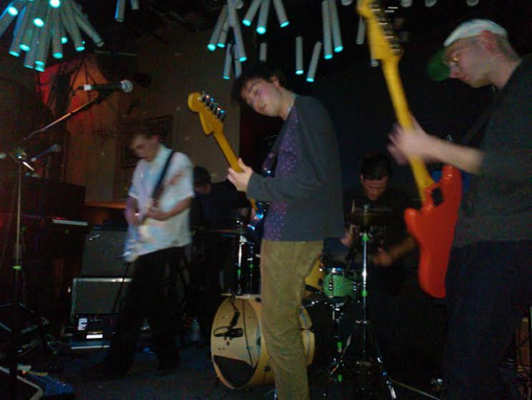 I’m always down for a billing of three bands that sound completely different. That was what I got last week on Tuesday March 18 at The Glasslands. What I didn’t get were performances that shook the building, but I did come across some cool acts with London’s Splashh headlining.

The opener was a New York-based group called Such Hounds. They definitely piqued my interested the most. They play off as a heavy folk group, but their sound is smattered with blues and garage elements. Their unpredictable and jangly nature was a lot of fun to witness live and I think they’ll continue to fly under the radar for now. “Sold My Soul” is a cool sample of what they do.

Team Me was the second group to perform. They won the equivalent of a Norwegian Grammy back in 2011 for their debut full length, To The Treetops. You couldn’t really tell by looking at them or listening to the, but they came all the way from Norway. The six-piece crafts indie pop that is layered with guitar, synths and extra keyboard. At one point they brought a couple microphones down to the audience so their most-devoted showgoers could join in the vocals. With anthemic qualities to their tunes, they were definitely the most engaging of the three artists. You can see what I mean in “F Is For Faker”.

In their return to New York, Splashh covered a great deal of their 2013 release, Comfort. They perform crafty garage fuzz, and sometimes fast-paced shoegaze vibes that provide you with a yearly glimpse into the hazy dog days of summer. The live version of “All I Wanna Do” was the best example of that. They were surprisingly straightforward and a more low energy presence than I expected in the confines of The Glasslands. Nonetheless, it didn’t retract from their material. I was just hoping for a bouncier affair. But in the end, I got my fill of spiraling guitar distortion.