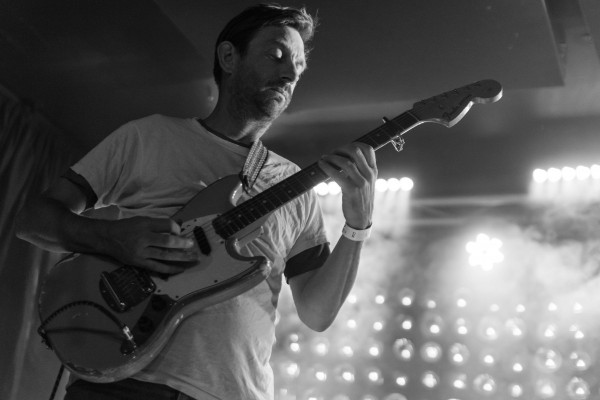 One of the more vibrant artists afloat out there is Sonny Smith, and his band, the Sunsets, whom I had my first dalliance with just this last week. The San Fransiscan embarked on a tour in support of February’s Talent Night at the Ashram, his fifth LP [Polyvinyl]. Meandering rock weaving between low tempos and tall tales is his game, and he does it well. Sonny and the Sunsets is also Shayde Sartin [bass] and Pat Toves [drums]; their prowess levies the songs to hit with real impact for the crowd.

Baby’s wasn’t that full that evening, but the devotees I bantered with pre-Sonny all were unified in their ardent support of his artistry and (curious) character. I surmise that a lot of people come to these shows simply to be in his presence sans expectations or spectacle. A cursory examination of his history reveals a long list of contributions to the San Fran arts scene before recording music. Oregonians can catch him and the Sunsets this weekend over at Pickathon, a weekend fest with the novel idea that every artist does two sets and includes a few other Beet-featured artists like Tinariwen, Ex Hex or DIIV.

A fellow San Fransiscan, Sarah Bethe Nelson, joined Sonny on tour. She and her band rock similar wavelengths as the Sunsets, but with a slight rustic/Western vibe. Seek out her recent debut, Fast Moving Clouds[Burger]. The album tells tales of her barkeep days around SF and definitely has that lone guitarist in a backroom pub vibe (been watching too much True Detective.) Her set closed with a psych rock-esque crescendo of guitars that was particularly neat/unexpected.

Sonny and the Sunsets