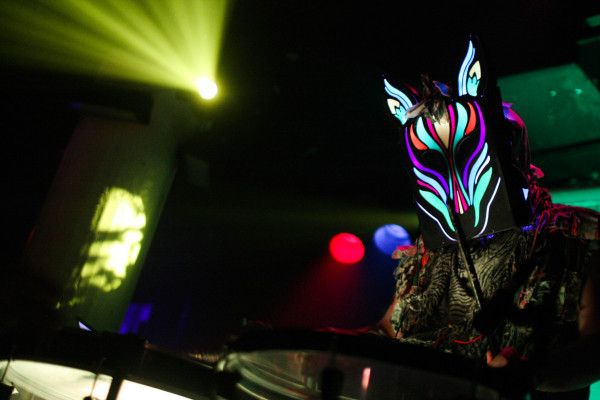 The fusion of dance beats and melancholia is a constant thing I seek in music. One of my favorite finds in that space going back a couple years has been Slow Magic’s “Sorry Safari“. The release of his second album, How to Run Away, via Downtown Records earlier this month still hits that sweet spot from start to finish. A lengthy US tour is underway in support of it, and I locked down my spot way for his stop at Santos Party House last week well in advance.

Live, Slow Magic emerges masked like a fox, fitted in tribal garb. Two large drums were his singular focus on stage, and they get a lot of attention during his set; every song comes with a commanding thumping of percussion. Slow Magic is silent during his set, but still kept in communion with the audience via touch for those close enough. I stepped away from this gig sweaty and dazzled. <3 back at you, Slow Magic.

In-demand beatmakers Daktyl (imported from the UK) and Kodak to Graph (LA via FL) have teamed up for support on Slow Magic throughout his tour. Their commonality is that they have dueling remixes of How to Run Away‘s lead single, “Girls“. Daktyl’s working on a debut LP, while Kodak to Graph put out Oldies earlier this year which features a remix of “Tease” by our pals in Salt Cathedral.