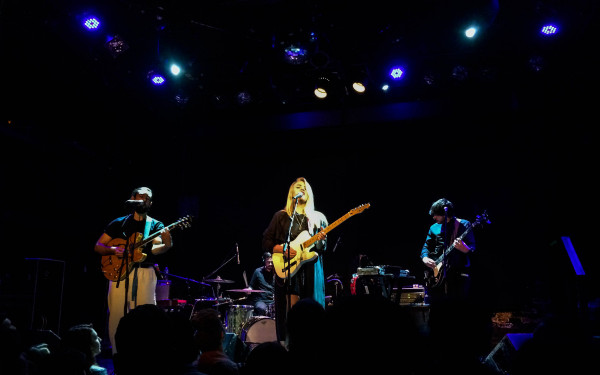 Sheffield, England’s Slow Club are a folk pop duo who are master pullers of heartstrings. The twosome, Charles Watson and Rebecca Taylor, just put out their third record, Complete Surrender, earlier this year to acclaim. It’s an epic sounding pop album, with a lot of loudness and sincerity, as well as a paucity of thumping electronics that define most current pop sounds. They embarked on a national tour to support it and were gracious enough to visit us at NYC’s Bowery Ballroom for a night of music to swoon to.

Live, the roster expands to four, with instruments and positions regularly swapping, but it is Taylor that generally handles the roles of ambassador. She is really good at it too; her easygoing nature kept the audience in a tranquil state, except when the music called for activity. We saw a set that was really heavy on Complete Surrender, before splitting into two encores. The second one was particularly special, with the duo regaling us unplugged.

Slow Club brought along on tour an excellent young musician with them by the name of Nick Mulvey. If you haven’t heard of him yet you will very soon. His debut album, First Mind, just got shortlisted for the Mercury Prize and is absolutely worth the merit. He played solo with an electric guitar, offering us folk jams and croons that hit surprisingly upbeat at times. His set was quite pleasant, and his promise to return with a full band next year has me anticipating very good things.

Brooklyn-via-California singer-songwriter Margaret Glaspy opened Slow Club’s NYC spot, and just wins for charm. Demure and humble behind a strong voice and guitar, she had the early birds at the show bewitched as she meandered through her set. She has an EP to her name from a couple years back, and likely more forthcoming.