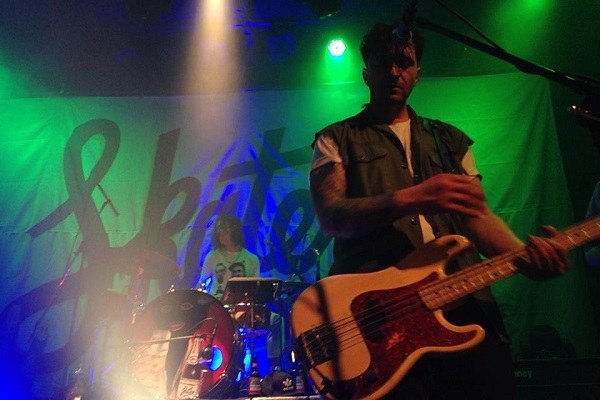 Skaters have been the subject of a lot of hype lately. In addition to playing their fair share of opening slots recently, articles about them have been popping up in magazines, social media, and virtually every music-related website out there (as well as some non-music-related). Touted as a new, young band responsible for capturing the essence of New York City in their garage rock sound, their label’s desire to market them as “Strokes-esque” for a new generation cannot be denied. And on Monday, February 24, this group of New York transplants celebrated the official release of their first LP, Manhattan, by headlining Bowery Ballroom. Opening for them were Bad Girlfriend and The So So Glos.
Not long after a low tempo performance by Bad Girlfriend, So So Glos were on stage letting everyone know it was time to put down their phones and get their blood pumping. As they were burning through the set, the main room, which had been practically empty during the first opener, slowly began filling up. After two songs, their lead singer, Alex Levine, was already furiously spraying spit and sweat on the crowd as he and the rest of the band hammered out one unruly song after another. While there was a palpable sense of excitement coming from the stage, the energy from the crowd did not match it, a fact that Levine brought attention to in between songs in his humorous attempts to encourage a more animated response. The Bay Ridge four piece have been an important staple of the Brooklyn DIY scene for awhile now, and after seeing them live, it’s clear why. With personalities and performances like theirs, it’s hard not to like them.
A little after The So So Glos’ exit, Skaters finally made it to the stage. Lead singer Michael Ian Cummings sported a white t-shirt with the words “Happy Birthday Mom” scribbled on the chest in Sharpie, a sentiment that he later reiterated towards the end of the night. The quartet were joined by Myles Matheny, previously of The Drums. The young crowd caught on about three songs into the set as “Deadbolt” finally inspired it to become rowdy. The rest of the night was a blur of camera flashes, singing, and moshing. As the album being celebrated that night consisted of an assortment of stylistically diverse tracks, the show followed suit: tapping into everything from brit-pop to low-fi garage punk to a heavily Clash-inspired reggae track, “Bandbreaker.” Unexpected highlights of the night consisted of the band’s cover of “This Charming Man” and a riotous rendition of “Territorial Pissings,” the latter of which seemed to have been improvised for the encore.

Symptomatic
This Much I Care
Deadbolt
Armed
I Wanna Dance (But Don’t Know How)
Nice Hat
Done for Good
This Charming Man (originally by The Smiths)
Fear of the Knife
One of Us
Miss Teen Massachusetts
To Be Young in NYC
Encore:
Band Breaker
Schemers
Territorial Pissings (originally by Nirvana)