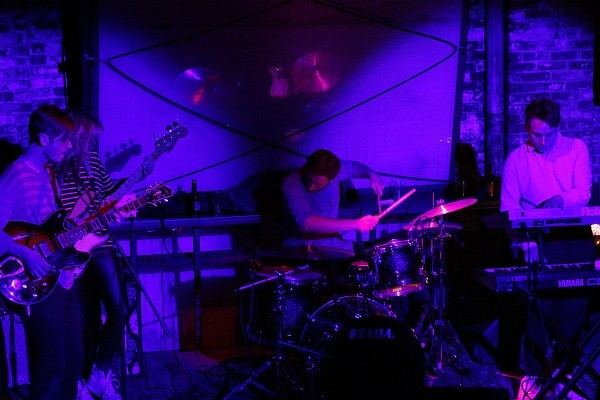 It was a typical frosty Wednesday night last week, and I was treated to a cool lineup at BAR in New Haven that fit the weather well.

I was excited to see Spectral Fangs for a second time in the last year, and they showed that they’re always capable of literally and figuratively warming the concert atmosphere. Sporting a slightly different and condensed lineup than I remember, they performed a set consisting of some new material, including “Stoned and Atoned”, which you can hear on our most recent installment of Beet Box Radio. With their power pop sound, the trio produced some of the most energetic jams of the evening.

Semicircle’s folk rock tour buddies in White Violet came on second. They have been out supporting their most recent full length release, Stay Lost. Their echoey live sound toys with a mix of folk and dream pop values. It was kind of like being submerged in a sea of somber yet strong instrumentals with formidable vocal work from frontman Nate Nelson.

For Semicircle’s Ryan Engelberger and Andrew McFarland, their material is a departure from what we are used to hearing from them and their other band Reptar. Instead of the sweet, danceable, party music their main project is known for, Semicircle creates more experimental, thoughtful, spiraling folk-like jams. This was their second gig in Southern Connecticut in the past several months, and they performed tracks from their debut LP, Blown Breeze, Grown Grass and We Are Part of the Earth. The live band brought a whole new dimension of sound to their music. Between the multiple guitars and the keyboard, there was a chilling, ethereal nature to their appearance and sound. “Mechanism of Erasure” sounds great off the album, but it was simply elegant live. It was a fascinating and thought-provoking set.