Say Anything @ The Best Buy Theater 6/28 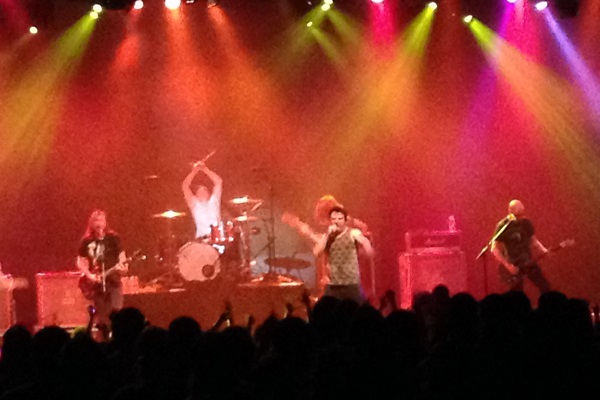 Say Anything brought their wonderful sense of self-awareness to the Best Buy Theater, touring in support of their new album Hebrews with a renewed sense of rage and intensity. On their latest track “Judas Decapitation“, they observe their own presence with the lyric “Be 19 with a joint in hand/Never change the band/Never ever be a dot dot dot real man,” a reference to how loyal their fans are to the seminal 2004 album Is A Real Boy…but anyone who has skipped out on giving their latest effort a listen is cheating themselves out of the fire you can only expect from years of Jewish guilt and indulgent self loathing.

Openers You Blew It! from Orlando Florida had a pretty hard time motivating the crowd to move around. Their frustration was fairly obvious, throwing a “New Jersey is outdoing you right now” at this crowd of New Yorkers who willingly chose to spend the night in Times Square. Tracks like “Gray Matter” reminded me a little bit of The Early November, which was easy enough to listen to. Whether the audience was actually unimpressed or if the popularity of the other bands on the bill just out-shined the openers, the reaction seemed aggravated from both sides.

Hometown heroes The So So Glos received a much better response, which was to be expected as their popularity continues to soar. Even the openers name-dropped the venue/DIY space in Brooklyn which they run, Shea Stadium. I was impressed by this band after catching them a few months ago as the opening act for Brand New’s much-hyped show at the Paramount. Embracing the weird, tracks like “Xanax” transcend the quick and dirty punk you would expect to hear from a bunch of Brooklyn natives. This band is fun to dance to, and one to watch for more great things.

With giant inflatable “TFB” letters as their stage backdrop, The Front Bottoms caused a mild hysteria to sweep the venue. The floor became so densely packed that it was impossible to move, let alone jump around. Playing favorites like “Twin Size Mattress” and “The Beers,” it was obvious how many people were there solely to see them play. I caught The Front Bottoms in 2012, opening for Say Anything and Kevin Devine at the exact same venue with just two members on stage. A few years later, it was great to see their massive following come out to celebrate their success. Combining over-the-top dramatic lyrics and catchy pop tunes, their formula creates a dark kind of party vibe. It was a huge treat to see them live as a full band, and I recommend you do the same soon.

Say Anything hit the stage and launched into their latest single “Six Six Six,” proving how insanely on their game right they are right now. Listening to the collection of their albums, you forget how much singer Max Bemis moves around. Fueled by a hilarious sense of wit, the band twisted and leaped through 15 of their best tracks with limited banter. The band played plenty of material off of their most popular album, including a personal favorite “The Writhing South.”

Surprisingly, Max’s wife Sherii-Dupree Bemis of Eisely fame did not come out on stage, though she appears on four songs off the new album. In fact, no guests made an appearance despite how many of their songs feature a famous friend or two. As an encore, Max came out for “I Want To Know Your Plans.” At this point, our fearless leader took the time to thank the audience, expressing his gratitude to see so many people still interested on their music. While treating the oldest fans to “Boyd,” a song he wrote as a high school student, I was reminded of how much this band affected me growing up and how they continue to do with each new album.

The first time I caught Say Anything was in 2005 at The Downtown in Farmingdale, Long Island, which was a much different sight to behold. Almost 10 years later, it was extremely satisfying to see them play to a sold out crowd in Times Square. If anything, fans can celebrate knowing that whatever life throws at this band they’ll continue to put out great music as a reflection.

Tagged: pop punk, Say Anything, The Front Bottoms, The So So Glos, You Blew It!