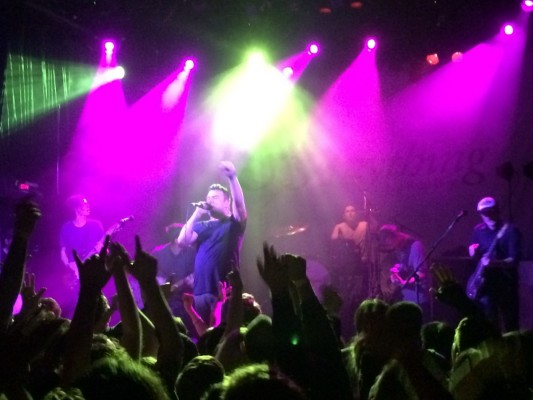 Mimicking the spoken word introduction to Say Anything’s first major album …Is A Real Boy, Max Bemis took the stage and declared “and the show begins with a song of rebellion!” Ten years and four records later, IARB holds court as Say Anything’s most coveted effort and possibly the most unforgettable album to have come out of the scene during that time. As their career started to take hold, Say Anything ripped a page out of the book from a big brother in the pop-punk scene, Saves The Day. Now that both bands are mostly grown-up and married, it was only natural that the two would team up for an anniversary tour of epic proportions with Saves The Day celebrating the 15th anniversary of their sophomore album, Through Being Cool. Adding Reggie And The Full Effect as opening support made the tour undeniably appealing as far as anniversary shows go, but nostalgia aside these album deserve every minute of their birthday celebrations.

As a member of The Get Up Kids and the now defunct My Chemical Romance, I’ve always been a fan of how James Dewees can balance being associated with so many huge acts at once. His solo effort Reggie And The Full Effect never seemed to get as much attention as some of his other bands did, but that never seemed to stop him. Dressed up as Santa Claus with members of Pentimento as his backing band of elves, it’s clear to see Dewees uses Reggie as an outlet for pure ridiculous fun. I’m a huge fan of Songs Not To Get Married To, and I was a little surprised to see Reggie slotted to play the lesser known Under The Tray… on this anniversary tour. Luckily, Reggie deviated from the script and played some of his more well-recognized songs, like “Get Well Soon” and “Congratulations Smack And Katy,” which anyone who was watching FUSE in 2006 will remember as “the peanut butter and jelly video.” The crowd was stoked on the switch up of albums and started to chant “Reggie!” to which James recalled how fans would upset his notorious band-mate Matt Pryor with similar chants at Get Up Kids shows. Reggie closed the set by stripping down from his Santa suit into a sexy-elf number and performing “Love Reality,” in the guise of one of his other monikers: the British techno-pop star known only as Fluxuation.

Saves The Day has re-invented themselves countless times in the world of pop-punk, having established their roots in 1994 and riding that momentum ever since. Personally, I was more excited to see what songs they were going to play after the twelve tracks off of Through Being Cool. The amount of music that this band has made is slightly overwhelming, and it’s hard not to form an opinion and pick a favorite. I’m used to catching Saves The Day at either very small venues or very huge festivals, so the lack of stage diving during their set threw me off. Typically there is very little barrier between the band and their fans, but Irving Plaza has a huge gap in front of the stage which not many people are able to clear. This did not stop the crowd from lunging towards the stage during old favorites like “Holly Hox, Forget Me Not,” and “Rocks Tonic Juice Magic,” especially when Max Bemis came out as vocal support. STD played an additional ten songs after tearing through their earlier material, including some of their more experimental tracks like “Freakish” off of 2003’s In Reverie. Further proving their versatility, the band threw a partial cover of The Eagles “Hotel California,” into the bridge of “Get Fucked Up.” With the two songs having been recorded more than thirty years apart, the cover felt strange and a little out of place but no one seemed to mind. A certain amount of experimentation is to be expected from this band celebrating twenty years of their career.

Say Anything’s backdrop for this tour resembles the original artwork of IARB, but with a gloved Mickey Mouse hand pointing a middle finger instead of Pinocchio’s phallic wooden nose. Max Bemis appeared confident and in command, having come a long way from playing these songs under the influence of drugs and alcohol in 2005. His reverence for the crowd was obvious, and could be seen each time he removed his ear piece throughout the set to gauge the sheer volume of his lyrics being sung back at him. The lineup of Say Anything has changed a bit recently, adding former Eisley member Garron DuPree on bass and Reed Murry to the drums. The sensibilities of the band have remained the same though: dark subject matters coupled with raucous finger pointing and call and response lyrics which seem to make Bemis’s despair a thing of the past. In the later half of the set, most of the band left the stage for Max to perform the album’s one true love song, “I Want To Know Your Plans.” Arguably, Max Bemis is at his best when he is going solo with an acoustic guitar. Choosing to momentarily skip the final song from the album, the band returned to play tracks from the extended version of the IARB known as …Was A Real Boy. Highlights included “I Can Get Sexual Too” and “Metal Now.” “Admit It!!!” was saved for the final encore, which had the crowd screaming “when I’m dead I’ll rest! When I’m dead I’ll rest!” as a poignant close out to the evening.

I’ll admit that none of Say Anything’s albums have hit me quite as hard or have left such an impact as Is A Real Boy… did. Perhaps it was timing, but Bemis came up with something unique and inspiring and the fans deserve celebrate that feeling again. Let’s see if the album can hold up for another 10 years and check it out when they come to your city soon.

Say Anything @ The Best Buy Theater 6/28