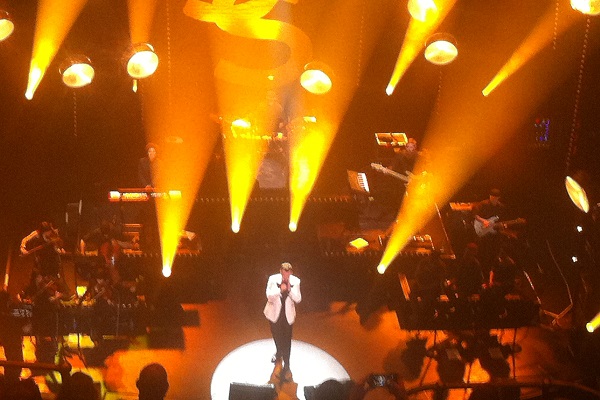 On Tuesday, June 17th, about 1,500 people had the good fortune to help Sam Smith celebrate the release of his debut album In The Waiting Hour in the world famous Apollo Theater in Harlem, and the anticipation for the show was palpable. Before the doors even opened, the line of concert-goers stretched around the block of 125th St. and Frederick Douglass Blvd. even though the show itself had ticketed seating. Though the show didn’t begin until 45 minutes after its announced start time, it didn’t keep a single person from erupting in gleeful applause when Sam Smith and his supporting bandmates walked on stage to kick off the festivities with the smooth and soulful ballad “Nirvana.”

Backed by a quartet of strings and a trio of backup singers, along with the more usual accompaniments of drums, guitar, keyboard, and bass, Smith captivated us as he gracefully navigated between slow, soaring melodies like “Leave Your Lover” and “I’ve Told You Now”, and more upbeat numbers like “Money On My Mind” and “La La La,” his collaborative effort with fellow Brit Naughty Boy. He also spent time sharing his thoughts and emotions with the crowd between songs, discussing his predilection for soul singers as a kid, along with some of the personal backstories behind a couple of his offerings.

It was an event without any pomp and circumstance in regards to strobe lights, pyrotechnics, and flashy dance moves, and the show was all the better for it, allowing us to be fully taken in by Smith’s effortless falsetto and overall uncanny vocal prowess without distraction. His performance of “Lay Me Down” shut the theater down in awe of the power of his voice and lyrics they carried. Briefly leaving the stage after performing close to a dozen songs, he and his band came back out to wow us even further, starting his encore with his stripped down version of “Latch.” He followed that with a song Smith said he placed last on his album to “end things on a positive note,” the hopefully patient ballad “Make It To Me,” which immediately became my new favorite Sam Smith song.

Smith still had one more card up his sleeve, inviting Mary J. Blige on stage to duet with him on “Stay With Me.” Both played their parts perfectly; with Smith exhibiting a quiet deference to Mary J’s confident swagger throughout, almost as if he was like us in the audience, surprised and in disbelief of the moment in front of us. We ended up standing united in joyous appreciation for all we had witnessed, wishing there was more to enjoy but thrilled at what we received. Appropriately, just like he sang to start the show, we knew it wouldn’t last, but he still managed to give us a taste of nirvana.