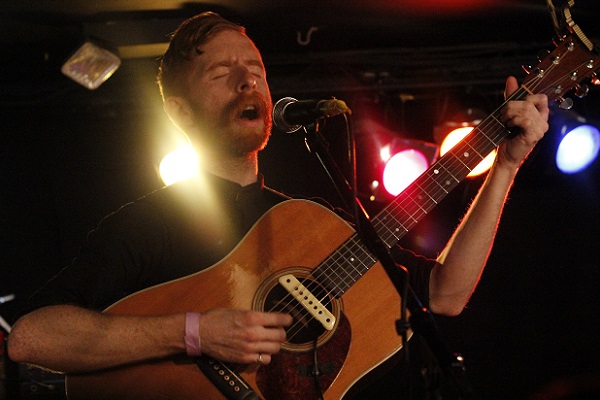 The billing last Saturday night at The Space was all of over the place, and it flowed considerably well. You could envision a musical spectrum that has 8-bit gameboy music on one end and subdued indie folk on the other and figure that it wouldn’t fit into the same night. On the other hand, with its unpredictability came a little something for everybody. Having already headlined The Space in January this year, Saintseneca returned this time to perform in support of their new release, Dark Arc.

Most of the material offered up by 10,000 Blades derived from their local roots, as they began the evening with some high energy punk pop that featured a friend of theirs popping up on stage occasionally to help shout out some additional vocal parts. It was a moshable set that had all the regional fans singing along.

Memory Map performed second with lots of new music in hand. The Indiana band is fresh of the release of a new studio full length entitled The Sky As Well As Space. With punk, pop rock influences, Memory Map played around with lots of guitar layering to make for the most experimental set of the night. It is also worth noting that their drummer was an absolute blast to watch.

With origins in Connecticut and New York, Crying twisted the momentum of the evening in another different direction. The three-piece’s signature sound comes from their 8-bit backing tracks. This was my first live experience with a chiptune band, and I remained intrigued throughout the whole set. There was a cool contrast between the instrumental energy and vocalist Elaiza Santos’ nonchalant performance style.

Saintseneca may travel all the way from Columbus, but they’ve grown into mainstays on stage at The Space as they’ve evolved into a band driven by powerful acoustic folk. Led by Zac Little, the multi-instrumental group performed while having its five members rotating between instruments for nearly every song in the set. Little spent some time solo on stage, just showing the strength of his soft, commanding vocals. Needless to say, Maryn Jones and company would create beautiful harmonies when they joined in.

To say that emphatic single “Happy Alone” was a standout in the set wouldn’t do the live rendition justice, and they closed out strong with another new stomp in “Blood Bath”. Following some pop punk, experimental rock, and chiptune, the mellow stylings of Saintseneca capped off the night perfectly.

Here’s a link to a full photo set from the show.