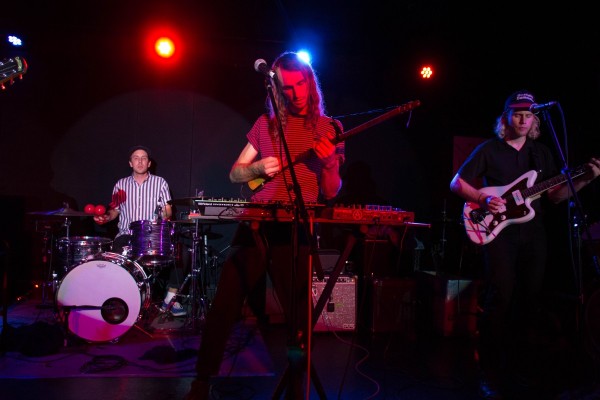 Folk rock darlings Saintseneca graced us with some good unique yet familiar American folk sounds at Mercury Lounge, celebrating a new album release. The Ohio native band, led by multi instrumentalist and singer-songwriter Zac Little, just released their third effort Such Things. Following on the footsteps of the brilliant Dark Arcs, which saw the beginning of the band’s growth by adding new members Maryn Jones (from All Dogs) and Steve Ciolek (from The Sidekicks) continues to expand on the sound of American folk influenced by blues and rock n roll. Regardless of the band’s expansion, Dark Arc was a very intimate album, Such Things tries to achieve greater things by carrying a louder sound and packing more punch in a live setting. Some of the best songs in the new album, including “Sleeper Hold” and “Bad Ideas,” were played.

I feel like there are way too many folk revival bands, but Saintseneca’s  distinguishes itself  with a unique and recognizable sound that seems to be heavily influenced by indie rock and post-punk. The combination of Zac Little’s ethereal lyrics and alternative instruments (they really like to use a sitar prominently) works well with the album themes that deal with big philosophical questions and existentialism, but expressed in an intimate and emotional human way that feels grounded and accessible. It can be borderline pop in some of its songs, but it’s fun as hell.

The band was touring with Yowlers and The Sidekicks (both bands composed of members of their own). The venue’s size, lighting and mood was perfect for the folk band’s efforts. And the band’s comedic interludes while they tuned and exchange instruments wrapped up what was a phenomenal album release party.