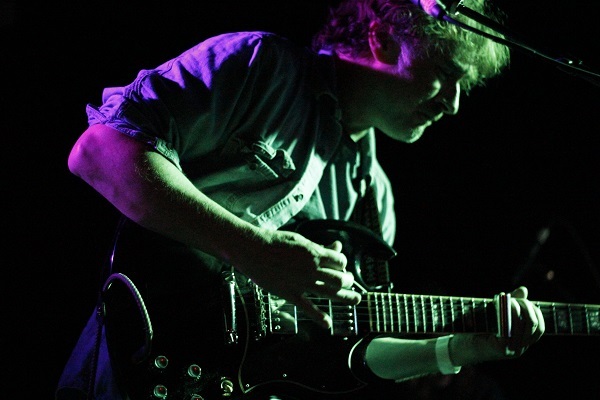 When Sean Carey isn’t drumming for Bon Iver, he fronts a five-man project simply called S. Carey. Its output is deep, harmonic material with beautiful instrumentals. Heavily reliant on keyboards and a variety of percussion, S. Carey set a relaxing ambiance in place for their co-headlining bill with Califone at The Outer Space in Hamden. The band is a more dynamic extension of Carey’s work in Bon Iver. Having his vocals on display is a good move on his part; I much prefer them over Justin Vernon’s. Towards the back end of the set was an entrancing, methodical drum duel in which Carey himself took part in despite manning a keyboard the rest of the set.

The resilient Tim Rutili is a keystone piece to Chicago-based post-rock group Califone. His tireless work with the likes of Califone, Red Red Meat, and Ugly Casanova make for a loaded resume, and his experience manifested itself in the live setting. He was adroit behind the keyboard and with his guitar in hand, mixing together lightly grunge-seasoned vibes with broody material like “Funeral Singers” and “Stitches”. Their multi-drummer setup created great depth in percussion. Califone’s 2013 release, Stitches, is their most recent material in a long line of work and it fit the instrumentally driven, experimental folk motif of the evening.