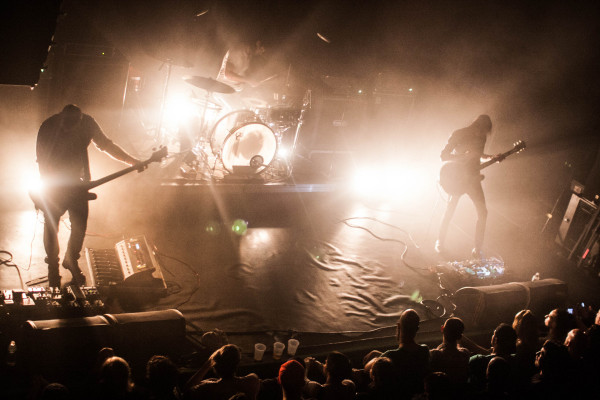 One of my favorite releases of 2013 was Memorial, an immediately gripping album by Chicago prog metal trio, Russian Circles. It’s immense depth and darkness, all portrayed instrumentally, enraptured me. I was left extremely curious to see how it would translate live and tripped out to catch them for what was my first jaunt with them on their tenth anniversary tour.

What strikes me most about Russian Circles live was visual; their innovative balance of light and shadow. There were long periods of pure darkness where the band, always mute, would play some of the slower, more ambient elements of songs. Then, as an apex approached, lights would blast the venue. Their positioning would silhouette them, further diminishing the connection between performer and audience to an ethereal point. That distance is part of their mojo though, and it works for them.

The roughness of Russian Circles music did not take long to foment a roaring mosh pit. I pondered on if it was really appropriate, but I eventually came to a general conclusion. There’s a catharsis to be had in letting things out (Shout!) via aggressive expression, which we don’t really have many opportunities to do constructively. I always feel a camaraderie when I’m in the midst of one and the constantly shifting visual landscape of Russian Circles probably made this particular one pretty fun to be in.

Kudos to Mutoid Man, the New York trio who opened the show with a ripping metal set. The group are new, but their members have some real cred as members of more established metal acts Cave In & Converge. Their only record so far is 2014’s Helium Head, out via Sargent House, the same label as Russian Circles. They showcased some additional versatility with covers of Black Sabbath, “Falling off the Edge of the World”, ft. guest vocalist Sarabeth Linden and a metalized version of “Don’t Let Me Be Misunderstood” to close the set.