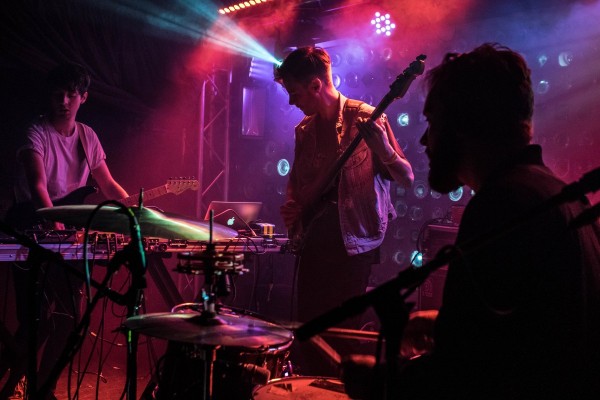 Baby’s All Right hosted Cologne-based electronica producer Roosevelt’s NYC debut show last week. A sold-out, enthusiastic crowd was there to greet him and his cohorts in the ever changing swirl of colors and lights. Bass thrumming and synths flaring, I felt compelled to put my camera down and my hands up pretty quickly.

2015 has been a year for Roosevelt (Marius Lauber) to make some “Night Moves” with a new single after 2013’s EP, Elliot. Momentum is definitely surging in his favor right now. With his brief US tour now concluded and that single’s release, we’re hungry for more here. It may be some time before he returns for more shows here and releases a proper debut album, but when he does either he’ll see open arms waiting him here in the States. His plans for the rest of Summer are to hit up the European festival circuit.

Similar in vibes and sounds was Rush Midnight (Russ Manning), the Brooklyn producer who opened the night. Sporting a similar trio set up (both bands had legit live iterations), a challenge was posed in the quality of his performance. People were dancing while the space filled up to bursting. Rush Midnight just put out a smoooooth new track, “Hard,” and looks to be gearing up to a followup release from last year’s self-titled debut. I fully recommend catching him again next time he gets busy here.