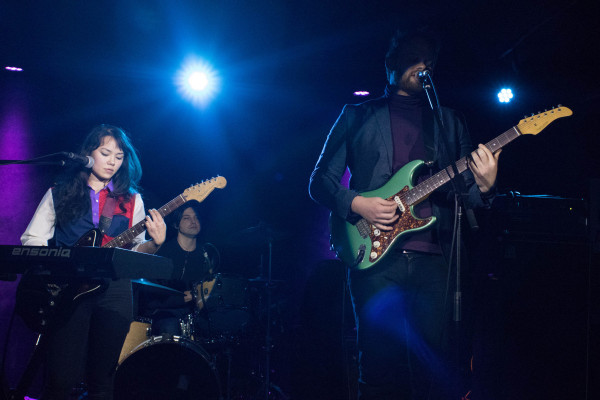 If you thirst for a lost era of synth laced, guitar pop melodies, Roman à clef will sate your desires. The new band played a quick headline set to preview new material from their upcoming album on Infinite Best in June. Roman à clef is a trio of established Brooklyn musicians: Jen Goma (vox, keys, guitar), Kurt Feldman (drums, synth) & Ryan Newmyer (guitar, vox), and it shows in the professional level of their output.

On stage, Goma and Newmyer have a constant vocal duel, with many Roman à clef songs having them singing as if one were responding to the other; it’s just great to watch. The energy level was high all the way through the end. I’m left pretty psyched for this album now. All we have for the moment though are a few demos in advance of its release.

Wins, a new project from Cassandra Jenkins and Fang Island’s Jason Bartell, opened with a set of dire rock music. Bartell’s double-necked guitaring offered some of the most complex sounds of the night. Paired with Jenkin’s softer vocals, it was ultimately compelling.

Brooklyn synthesizer tandem Klaus opened the gig. They’ve got some chill dance beats that are worth an earful, especially “Chump.”