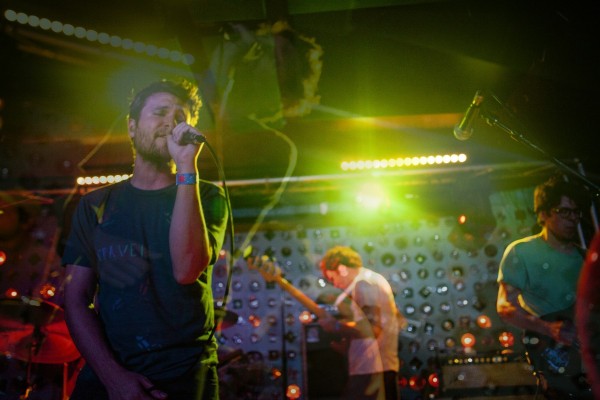 Last week, Ra Ra Riot set out on a long-awaited – albeit brief – tour of the Northeast. We at the ‘Beet were lucky enough to catch them twice on their five-city stop, last Tuesday at Baby’s All Right, and the next night at Great Scott in Boston, MA. I caught the second of those shows, which was personally exciting since they are very much a sentimental band for me. This also marked the fourth time I have caught their live act over the last few years, with each of their shows happening at distinctly different venues; once at your garden-variety concert venue (Music Hall of Williamsburg), once in an arena (Barclays Center), once in a church (New Haven, CT’s Church on the Green), and now this time in a small bar venue. Their show at Great Scott last Wednesday was particularly special, not only because they had not toured as a band in two years, but that they don’t typically play venues this small anymore (they last played Great Scott a whopping eight years ago), so to be a part of the audience in such an intimate setting made for an even more rewarding experience.

Because of the small size of Great Scott, the band (which is six musicians deep when they play live) appeared as squished in as the rest of us in the sold-out audience, relegated to their respective marks for a majority of the show. However, Wes Miles and his fellow bandmates were undeterred, as they brought their familiar brand of energy, indie pop, and strings (of course) and put on a wonderful show, covering all of their full-length and EP releases, as well some new material, in just the first five songs of the night. Speaking of their new material, Ra Ra Riot introduced three new tracks during their set, “Foreign Lovers,” the funky, string-laden “Bad Times,” and “Water,” which Miles admitted afterwards was his new favorite song. Hearing new music gives promise to the possibility of a new album in the works, and although that nugget of information is still a mystery, Miles did let slip that the band is soon returning to Boston with an already established date, of which he’s keeping secret for now. While this mini-tour is giving the band the opportunity to brush the dust off of their live act, it was clear from their 16-song offering that there has not been any drop-off in quality or sound. Ra Ra Riot is as good as they’ve ever been, and we look forward to what they have in store for us down the road.

Kicking off the evening was the Boston-based trio Bent Shapes, who played fast and furious to the delight of those in the audience who arrived to the venue early. A jangle pop band with influences ranging from garage to post-punk, Bent Shapes’ live act was very frenetic in a good way, as their upbeat sound – paired with most of their songs clocking in at under three minutes long – kept the crowd on their toes and their heads bobbing. Their music could readily be described as socially conscious, as at least three of their offerings had to do with topics ranging from consumerism and capitalism, to the ills of social media, and the lyrics’ overall tone blended well with the music surrounding them, without coming across as full-blown political statements. Two highlights of their show was “Behead Yrself, Pt. 2,” a short and sweet tune which was a brass instrument shy of being ska, and their song “Big Machines,” which ended the set with an up-tempo flourish. All in all, Bent Shapes proved to be a solid appetizer for Ra Ra Riot’s main course.

St. Peter’s Day Festival
Too Dramatic
Binary Mind
Bad Times
Can You Tell
Oh, La
Dance With Me
Run My Mouth
Angel, Please
Water
Too Too Too Fast
I Shut Off
Ghost Under Rocks
Beta Love
Foreign Lovers
Boy