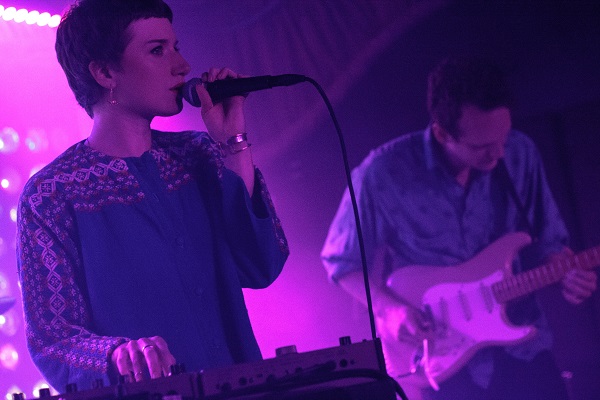 Hazy Portland-based indie group Pure Bathing Culture has yet to fail at capturing my attention. I’ve found myself building a deep connection with their music and finally got an opportunity to see them perform live a few weeks ago at Baby’s All Right in Brooklyn. With a new album on the way, I got to hear some brand new tracks for the very first time.

The sneak peek into what’s in store on Pure Bathing Culture’s forthcoming sophomore LP Pray For Rain assured us that there is no slump to worry about. 2013’s Moon Tides was a melancholy force to be reckoned with, echoing somber seasonal vibes that made you want to cozy up to the album during the darkest days of winter. Their LP2 takes a 90 degree turn into cheerier, warmer territory, without disrupting the foundation that the dreamy group has forged.

The internet became quickly acquainted with and intrigued by new tunes “Pray For Rain” and “Palest Pearl”, two of their most upbeat offerings entirely. Seeing those tracks performed live alongside their dulcet counterparts like “Pendulum” and “Scotty” was a delight, especially because they maintained an impeccable setlist flow. The best part of the night was being introduced to “The Tower”, a smooth, almost jazzy groove that is somewhat a departure from Moon Tides, but still showcased the strongest aspects of Sarah Versprille’s vocals. It seems as though Versprille and company haven’t missed a beat between albums. It’s the same Pure Bathing Culture we know and love. Having took their music in a risky direction, it seems to have paid off. Check out Pray For Rain, available this Friday, October 23rd via Partisan Records.

Pure Bathing Culture brought along their Portland, OR friends, Wild Ones, to play in support. They also perform with a similar, chill energy as Oregonian buddies. Wild Ones recently put out their Heatwave EP, of which they played some sway-inducing tracks. The oohing in “Show Me Islands” had everyone aahing.

It is worth noting that each band covered a song called “Dreams” to close out their sets. Pure Bathing Culture performed a soothing rendition of the Fleetwood Mac favorite. Wild Ones treated us to The Cranberries’ 90s staple by the same name. It was dreamy night indeed.