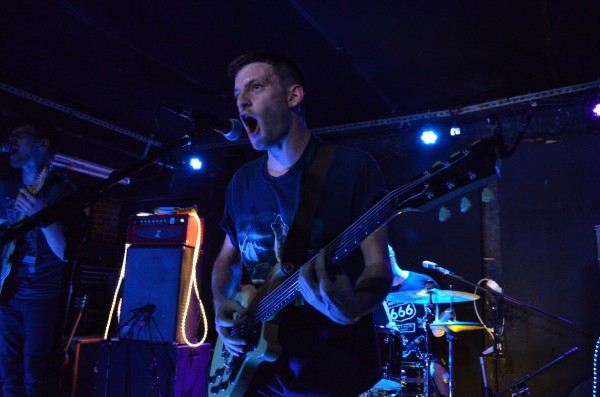 2014 has been a whirlwind year for upbeat, Canadian punk rockers, PUP. Fresh off of a recent signing to SideOneDummy Records, their self-titled debut was a well-received success. After a summer spent opening for Lemuria and the Menzingers (whom they played with at Webster Hall in May), they immediately embarked on a tour of the UK and a Fall US tour, which they headlined. Their November 7th show at Mercury Lounge was their second to last tour date.

Washington D.C. based Typefighter, a band whose sound can be as melodic as it is raucous, opened the late night show at approximately 10:30 PM. Performing songs off of their 2014 release The End of Everything, along with some new material, it was clear that both the band and audience were enjoying themselves. As I took in each song and gleefully enjoyed watching bassist John Scoops (who introduced himself to me as “Scoops,” prior to the show) pinball around the stage, I with a great impression of a band I had first listened to that morning.

Brooklyn based pop-punk band Chumped was second on stage. As an opener for established acts like Modern Baseball and Elway, Chumped is a band with immense talent and a very bright future. It’s always a special occasion when you get to see bands play their largest ever show in front of their families and friends. Throughout the set, the raw emotion each member must have been experiencing was evident on their faces and in every note played and sung. They kept the audience in the palm of their hands throughout. Leading into their final song, lead singer Anika Pyle teased a cover of the Ke$ha hit, “Die Young,” before seamlessly transitioning into “Something About Lemons.” The audience roared in approval. If the fan reactions are any indication of their future success, then I expect to see headlining in the near future. Their latest LP, Teenage Retirement, is set to be released on November 18th, and is now streaming on the band’s Soundcloud page.

PUP took the stage around 12:30 AM, and delivered a relentless tour de force of their debut. When I saw them perform as openers for Lemuria and the Menzingers in May, I was immediately taken by the band’s raw energy and plain loudness. As headliners, and performing in front of their first sold out crowd, PUP simply amazed. Taking full advantage of the Mercury Lounge’s intimate atmosphere, PUP transformed from a band that once received polite applause in May, to one whose audience crowd surfed and sang along to each song – myself included. Photographers huddled to shield their cameras, feet were stepped on, and elbows were thrown. Still, not once did I notice anyone complain. The crowd was simply too engaged in the performance in front of them. Ditching the formality of an encore and without missing a beat, they closed the set with a rousing rendition of the Beastie Boys’ “Sabotage.”

It’s approximately 1:30 AM, and I’m covered in sweat in front of Katz’s Deli, on East Houston St. My favorite red flannel button-up is soaked through and draped around my neck. The fact that my phone shows that it is in the high 30s is irrelevant. Within a few days, some rather unflattering photos of me will be posted on better known music blogs, by cameras worth more than ten of mine. Regardless, I am exhausted but content after a night of three excellent sets by three excellent bands.