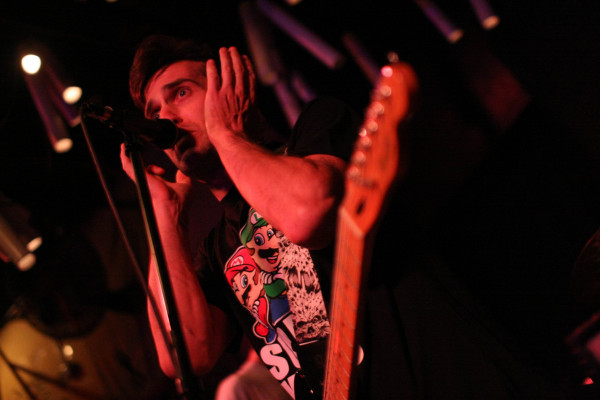 Pretty & Nice are a group I only started dallying with just recently, finding myself inexorably drawn to them by the unbridled energy in their 2013 album, Golden Rules for Golden People. The group recently released an EP, Infinitely Forever, with one giant asterisk attached; that it is their epitaph. They sealed the deal with farewell shows here and in their hometown of Boston (though they recently announced an actual last gig at CT’s I Am Fest on 9/6).

The members of Pretty & Nice at their departure were Holden Lewis, Jeremy Mendicino, and Roger Lussier, joined by drummer Michael Tucker. It’s an amicable split, officially labeled a hiatus while the group goes on to focus on other aspects of their lives. The band’s set stayed mostly upbeat and wacky, closing their main block with the two originals on Infinitely Forever, and then finishing out with last year’s “Yonkers“, which felt like an epic conclusion. Best of luck to them on their future endeavors.

Sharing the bill earlier on in the night were a trio of NY bands. Denizen crowded the stage with six to form a sort of blues rock apparatus, while Adult Dude offered a snarl befitting a punk rock sound. Jacksie‘s output was some of the chillest instrumentals of the evening. All were earnest efforts from the underground.