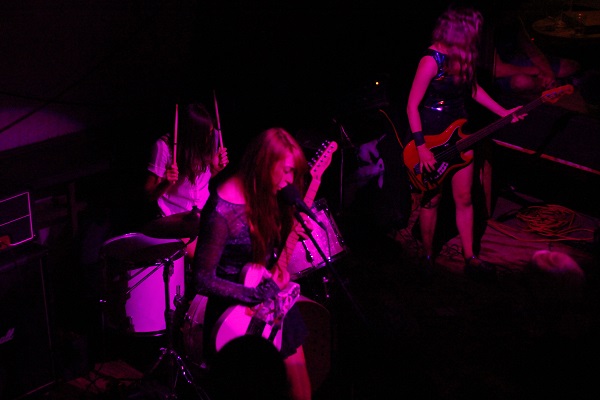 There was an abundance of noisy punk rock vibes at BAR in New Haven last week when an assortment of Massachusetts-based bands took the stage. Celebrating the release of a new album, Blessed State and a pair of other bands got some stage time in support of lady rockers, Potty Mouth.

I wasn’t able to arrive in time for the first set, performed by New Haven’s Oughts. They can certainly bring the hard rock, and I’m sure they lit up the back room at BAR very effectively.

The first band I caught was Neoteric, who jammed out with some post-hardcore rock riddled with noise and emphatic vocals. The trio was in tune with the evening’s hard punk energy, and were not afraid to punish their instruments by shredding and drumming as hard as possible. The acoustics of BAR amplified their noise, turning them into a pleasant smack in the face.

Blessed State was a whole different animal and attention-grabber in their own way. Their brand of punk differed from the rest of the lineup because the weight was carried by the screamy vocals and stage (and off-the-stage) presence of frontman Brian Frenette, who wasn’t afraid to leave the stage and sing directly to the spectators. His vocals and the crafty guitar work of Rob Flaglor were so exciting and aggressive that they could have awoken the dead. The set served as a record release show for Head Space, an album they just put out in June.

Everything led up to an angst-ridden set by the ladies of Potty Mouth. What else would you expect from a girl-group that has a track that insists that “you’re a shithead”? With broody ’90s indie undertones, the foursome knows how to rock and play a set that packs a punch. Abby Weems provided fierce vocals that were a perfect fit for the frantic instrumentals. Recent addition to the band and lead guitarist Ali Donohue would chime in with some fiery contrasting vocal support, something I’d like to see more of. Potty Mouth’s chemistry is still evident despite the departure of Phoebe Harris earlier this year. All in all, we saw a complete set that featured all the attitude you’d expect from these ladies.

Have a look at my full photo set for the show here.