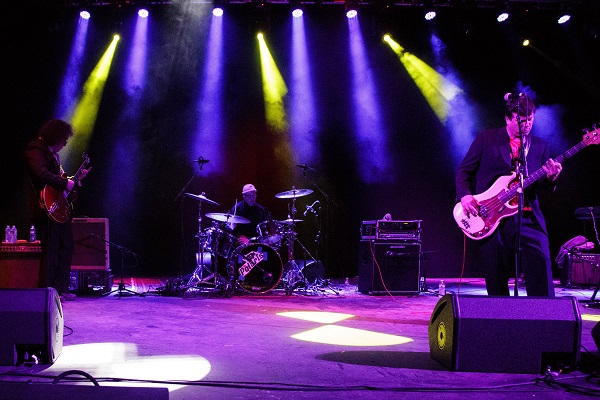 Polaris was your headliner, best known for providing music for Nickelodeon’s The Adventures of Pete & Pete. Featuring Mark Mulcahy from Miracle Legion, also of New Haven fame, the fictional turned real band has something of a cult following in the area. They performed a series of tracks from Music From The Adventures of Pete & Pete, just re-released on vinyl. I would have never have thought years ago when the show was on air that I would have been able to see the theme, “Hey Sandy” performed live.

We also saw a set from Mates of State, who through their travels have taken up residence in Connecticut. The husband-and-wife duo played a set consisting of newer tunes like “Palomino”, and more of their well-known material like “The Re-Arranger”. In the meantime, you can anticipate the release of their forthcoming EP, You’re Going To Make It, due out on June 16th.

Snagging the opening spot in this show was Mighty Purple. Brothers Steve and Jon Rodgers have been a fixture in the local music scene for years and there was something special about them coming together and being the first Connecticut band to grace the stage at the venue. They warmed everyone up with feelgood jams that were a pleasure for just about any music fan. It is worth noting that Steve also owns The Space and The Outer Space in Hamden, CT, which you’ve seen featured many a time on Neat Beet.

It wasn’t your everyday billing, but it certainly was a stellar way to usher in a new era of live music in New Haven, Connecticut.

Other big names on tap for the venue as we approach the second half of the year include Neon Trees, The Decemberists, The Doobie Brothers, and plenty more.