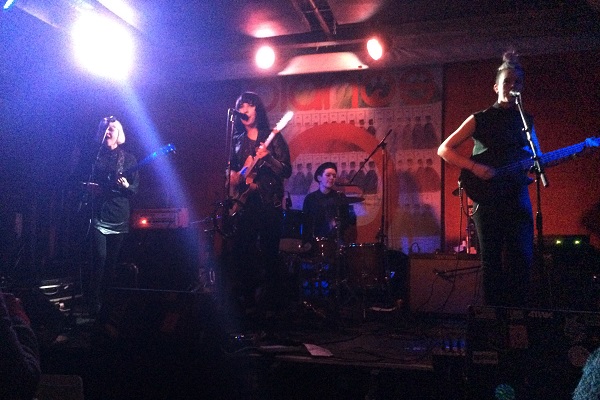 Pianos plays host to diverse lineups nightly, but the evening of March 18th saw them host a few acts far beyond Brooklyn. While Courtship Rituals still represented the locals, we also saw Glass Towers and PINS who hail from Sydney and Manchester, respectively. The group of bands offered a variety of sounds that, as much as they differed from one another, ultimately came together to provide a little something for everyone.

Glass Towers took the stage as the night began at around eight. The quartet clearly enjoyed the experience, they excitedly worked through their set, which consisted of tracks from their latest LP, Halcyon Days. Their sound, reminiscent of what one might have expected if the Cribs had chosen to pursue a career in indie pop alongside Two Door Cinema Club and fellow Australians, Last Dinosaurs, was an upbeat and engaging one. While the members were noticeably feeling the restriction of the small stage, they still demonstrated an enthusiastic demeanor that lasted throughout the night. As the show came to an end, the group wrapped up their last track with a burst of energy that left the room humming the chorus until the next band got on stage.

Courtship Ritual began playing as soon as they were set up. In direct contrast to the previous performance, the night’s second act featured large, dark projections that paradoxically brought attention the two musicians while shrouding them from sight. The trippy ambiance suited their music well, the majority of which seemed to be inspired by 90s alt-rock bands such as The Breeders and Blonde Redhead. With the combination of the low lighting and moody music, it was easy to lose track of time as each of the duo’s haunting melodies ran into the next. The set went by quickly, and although, when all was said and done there was no real continuity with the previous group, it somehow felt like it worked.

The girls from PINS loudly began their first song without any forewarning, immediately capturing the room’s attention. A combination of strong drums, heavy bass, melodious guitars, and distinctive vocals, PINS is what most all-female bands strive to be but are unable to achieve: attractive, cool, and wonderfully talented. Rock and roll felt truly alive as the Mancunian group resonated an old school New York vibe while performing various numbers off the album Girls Like Us. The girls were as loud as they were captivating, and are sure to find themselves the objects of both envy and attraction as they grow in popularity. You can catch their single, “Girls Like Us“, in the inaugural episode of Beet Box Radio.