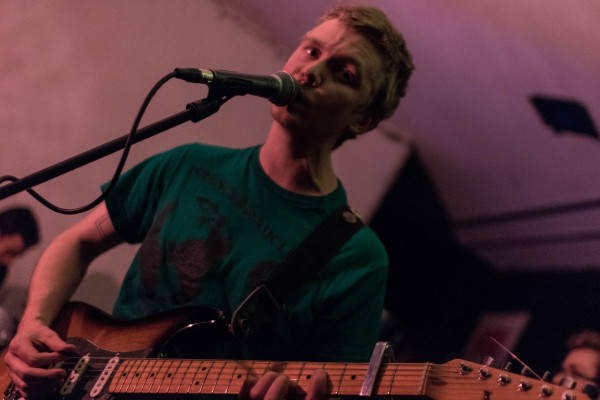 Shea Stadium is always a viable proving grounds for catching emerging rock acts, and this Winter night was no exception. Pinegrove, a troupe of rocking New Jerseyans, headlined a collection of loud, and energetic acts. The venue was full the whole night through, and the crowd around me seemed to be shifting regularly, suggesting a lot of folks in and out to see their friends playing earlier.

Paper Streets opened the night, followed by Washer. Paper Streets veered closer to emo territory, while Washer gave me a vibe closer to grunge. Washer has an album coming out next week, which you can bookmark right here.

Depending on who you ask, Massachusetts’ Vundabar may have been the highlight of the night. The trio recently released their second album, independently, Gawk, and it’s an unhinged collection of speedy gems. The crowd was displaying intense energy, shouting back all the wacky choruses and moshing along. I love the vibe when I’m photographing front row and fending off bodies left and right. Check out “Ash in the Sun,” and you should understand their mentality really quick.

Though Pinegrove, who closed out the night, didn’t have any moshing, there was a different vibe in the sense of camaraderie I felt. The crowd, calmer, but still buzzing, bounced around to the music and knew much of the lyrics. Vocalist Evan Hall has that slight drawl which constantly had me imagining the periphery of alt country, but make no mistakes. Have a listen to “New Friends,” and you’ll get a vibe distinct entirely; or try the just-revealed “Old Friends.” The twin songs bookend Cardinal, their debut album on Run For Cover Records out next month.