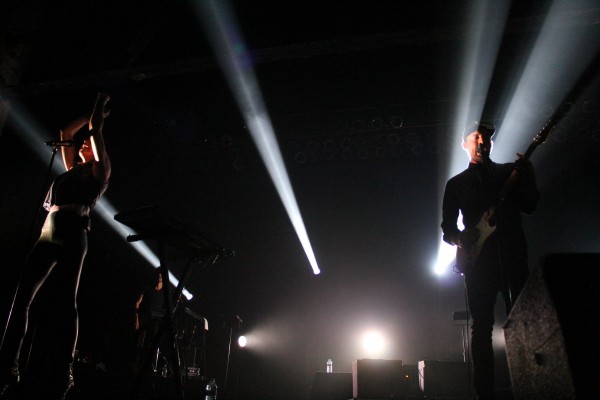 Phantogram (Noun) 1-A form of optical illusion that uses perspectival anamorphosis to produce a 2-D image that is distorted in a particular way so as to appear three-dimensional in nature.  2- Electronic rock/Shoe-gaze due of long-time friends Sarah Barthel and Josh Carter from Greenwich, NY  who have graced the airwaves since 2009. The dreamy NY-based duo came to the Long Island stage for one Friday night performance touting songs from their 2014 album release Voices and their 2009 Eyelid Movies, as well as some select songs from their EPs Nightlife and self-titled, Phantogram.

Ethereal, swirling electronic soundscapes punctuated with the breathy, echoing vocals that Barthel delivers so well, it’s almost scary.  The decades long friendship between Carter and Barthel is evident in their presence together onstage, complimenting each other in ways that only true friends know how to do.  A kinetic energy was brought about that night with Barthel’s brunette locks swinging madly as she hopped back and forth on stage in time to Carter and co’s instrumental psych pop interludes. A refractive optical illusion borne from the multi-reflection of a fractal mirror jacket shooting out yellow prisms of light donned by Barthel during a particularly slower ballad really rounded out the glaring parallel between their namesake and the performance itself.  It’s quite evident to see the musical inspirations of the likes of Prince and Sonic Youth weaved into the unique tapestry that is now Phantogram, bridging the figurative gap between reverie and reality. The show came to a blazing front when the familiar string introduction of the band’s madly popular “Fall In Love” began to play and the audience lost its collective mind and melted into an electric chorus, echoing back the lyrics word for word with unparalleled enthusiasm.

The LA turned Queens act of Son Little opened the show. As the alias of Aaron Livingston, Little warmed up the audience with his expressive acoustic blues, bleeding with the raw elements of vintage soul and conscious hip hop. A seemingly fluid transition into the dreamy act to follow.