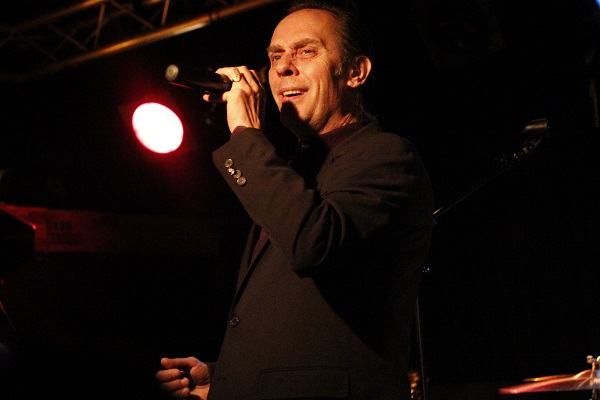 In the early 80s, British post-punk band Bauhaus rose to the forefront of the goth rock scene with singles like “Bela Legosi’s Dead” and a highly regarded cover of David Bowie’s “Ziggy Stardust”. Leading the pack was vocalist Peter Murphy. Active until 1983, the band came alive on several other occasions since. But Murphy’s solo career has kept him busy along the way. This year saw Murphy release Lion, his tenth solo album, proving that “The Godfather of Goth” still has plenty more gas left in the tank. He’s in the middle of a two month long North American tour and made a stop in Connecticut on June 11.

Based out of Austin, TX, opener Ringo Deathstarr produced shoegazy, wall of sound vibes backed by a more traditional rock energy and pacing.  The trio set the stage for Peter Murphy by dialing time backwards to a dark portion of the late 80s/early 90s where noise became a point of intrigue. Vocally, their set was shrouded in a fuzzy haze of head bobbing distortion. Drummer Daniel Coborn brought pounding drum beats into the equation. The band put some recent material on display following up on their March release, God’s Dream.

Peter Murphy began his set with the dark Lion opener, “Hang Up”, which possessed a modernized goth energy, reinforced by Murphy’s eerie bellowing of “Hagia Sophia”. He continued to transcend time by congruently performing old and new material. Even though he showcased sounds that are several decades apart, the show flowed as if he completely played through an entirely new full length release.

I wasn’t even two months old back when he released Deep in 1989, but that didn’t stop me from appreciating how its quality remained unchanged. “A Strange Kind of Love” was a fantastic mellow point in the show, and as I had hoped, “Cuts You Up” was a perfect closer to the set. When Murphy touched on his past material, it was nice to see him dip into the pool of Bauhaus songs. It was a solid throwback to 1983 hearing “She’s In Parties.” Almost strictly focusing on his haunting vocals, Murphy did squeeze some guitar into the set, as well as a great melodica solo. The whole evening was reassurance that Murphy’s musical career is alive and kicking after all these years.