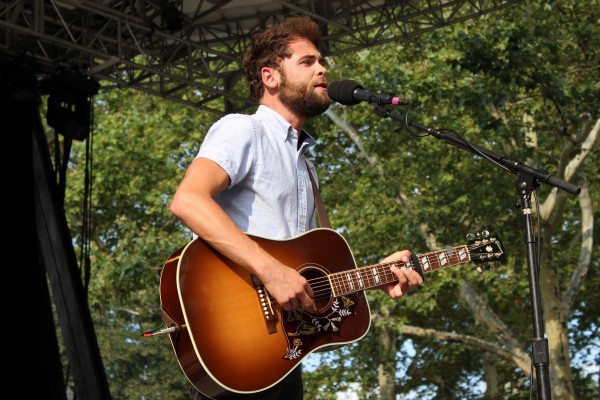 August can be a frantic time for many. “Back to school” sales are in full swing, students are mentally preparing themselves for the realities and woes of thesis papers and just about everyone is scrambling to get as many things checked off their “summertime bucket list”. But on Sunday, August 10th, Central Park was filled with people of all ages who decided to walk away from these hectic realities for just a small while.

As part of the annual Central Park Summerstage event series, Passenger performed a free concert at Rumsey Playfield. The show was one of Neat Beet’s Top 10 Summerstage Shows for 2014 and thanks to the support of Stu Larsen and Liam Bailey, made for one of the most enjoyable concert experiences I’ve had this summer.

Stu Larsen was a last minute addition to the roster but one that was certainly welcomed. He is a singer-songwriter hailing from Australia that incorporates orchestral undertones to his pieces. He graced the stage alone and while having the immediate attention of those lucky enough to come early, it was his cover of Coldplay’s “Fix You” that really won over the audience. Stu performed much of Vagabond, Stu’s full length release from earlier this year, with subtle anecdotes both hilarious and heart-wrenching. His single, “Skin & Bone”, is available on his website. The cost? Just your e-mail address.

Liam Bailey was the “black sheep” of the live performers that day, not only stylistically but by presentation and on-stage persona. Bailey’s sound can only be described as one that channels the spirits of Otis Redding, Gary Clark Jr., Sam Cooke and The Wailers simultaneously. The Nottingham, UK native was graced by a full band including a small yet dynamic brass section. Liam Bailey’s debut entitled Definitely Now comes out Tuesday and this concert showcased what is expected to be a great release. He plays a show tonight at Brooklyn Bowl as a part of its School Night! series. The show is free if you RSVP before 3:00 PM (act fast!). Otherwise, a mere $7 will get you access at the door.

Michael David Rosenberg, best known as the one and only member of Passenger, walked out to an eager, enthused crowd.  An on-stage introduction provided the only announcement of the beginning of his set. For the first time at any concert I’ve personally attended, I saw a single person perform alone on a completely bare stage. Amplifiers, percussion sets and other musicians that typically grace the backdrop of the lead singer were unaccounted for. Even the LCD monitors that graced the artist’s name during the opening sets was off and remained off throughout the entire performance. This was an awe-inspiring, effective way to keep the focus on Rosenberg throughout the set. He was a humble, engaging performer who not only provided some insight to his time on the road or writing process but also had the audience roaring on several occasions. (partly a result from his fusion of dry humor, “sweetness” and his love for cursing) The highlight of his set (and possibly the whole evening) was his cover of “The Only Living Boy in New York” – an ode to Simon & Garfunkel’s The Concert in Central Park. It was the only time throughout his set that other musical accompaniment was provided by the day’s opening musicians.