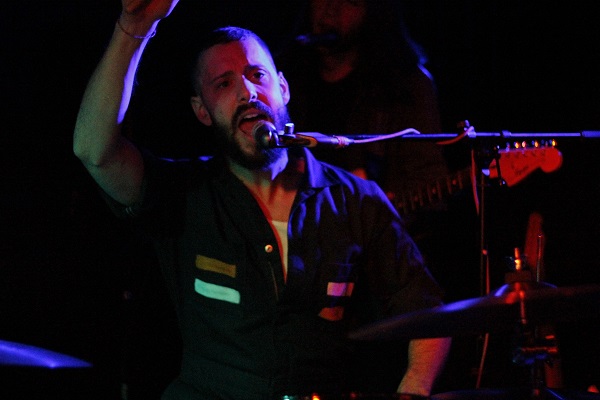 PAPA drummer Darren Weiss’ mission last Thursday was to make sure that each and every occupant of Cafe Nine in New Haven had a smile on their face by the end of the night. While amping up the audience, this was was PAPA’s opportunity to warm up for their appearance at Governor’s Ball over the weekend. Needless to say it was an ultimately successful operation. Joining them were a pair of Connecticut bands, Spectral Fangs and Hubbell Mountain.

Danbury, CT’s own Spectral Fangs were up first. Influenced by experimental rock and post-punk of old, they produce a sort of garage sound, power pop sound that is backed by melancholy aggression that bears resemblance to something off an album from Joy Division of The Smiths. Listen to “20” from their recently released Memory Girl EP to see what I’m talking about.

With a more lighthearted charge, Hubbell Mountain kept things going with their own mystifying sound. The fusion between the guitar, added keyboard sounds and vocal modulation make for a great outer space soundtrack. I still see Radiohead’s In Rainbows as an obvious influence for this band, and Hubbell Mountain’s extension of the style was very pleasant.

When it came time for the headliner, Weiss readied for PAPA‘s set by loosening up in the audience like a track star with percussion bells, and before the end of the set he made it a point to high-five everyone in the venue before returning to the stage. Mid song, nothing stopped him, even an untied shoelace. Having somehow worked tying his shoes into a track, his antics didn’t upstage the quality music.

Known for their quality alternative, folk-driven jams, LA’s PAPA was certainly capable of firing up a small space like Cafe Nine. They covered several old and brand new tunes, but mostly performed the bulk of their latest LP, Tender Madness. Weiss doubled as drummer and lead vocalist, and it was also cool to get up close and watch guitarist Daniel Presant jam. “I Am the Lion King” served as one of the most engaging and exciting set closing tracks I’ve heard all year.

Click here for the full photo set, in addition to the shots below.