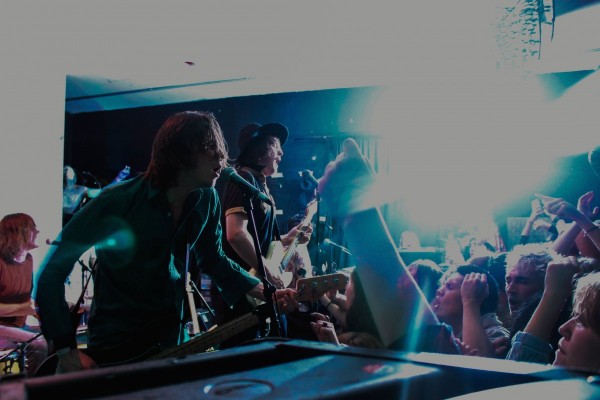 Before their visit to SXSW and their sold out show at Baby’s All Right, UK band Palma Violets stopped by Shea Stadium, a return to the first NYC venue they played at two years ago. The lineup of supporting acts was TBA until closer to the date, and it was an interesting one. Local psychedelic rock act Sunflower Bean was the first act of the night, bringing a lo-fi groove to the early crowd. Show Me The Body was a rambunctious one, showcasing a very peculiar sound labeled as sludge rock, a crossover between rock and southern music. HINDS (fka Deer) was the highlight for me, a band from Madrid, Spain. They’re an up and coming garage pop band that are definitely on the list to keep an eye out for in 2015. The girls from HINDS had some passport problems and had to cancel an earlier show, but I’m glad they made it to New York. They are so darn catchy and fun to see live. They are currently playing at SXSW so if you happen to be there this week, make sure to see them.

After their first show in NYC two years ago at Shea Stadium, Palma Violets came with a mission to rock out louder, and almost broke the stage, literally. It was a show full of energy and loud catchy choruses, the crowd participated on stage in more than one occasion, and at some point I had some speakers fall on me, but I survived! They have a new record coming out in May 5th aptly titled Danger in the Club. It was fun guys, see you around next time.