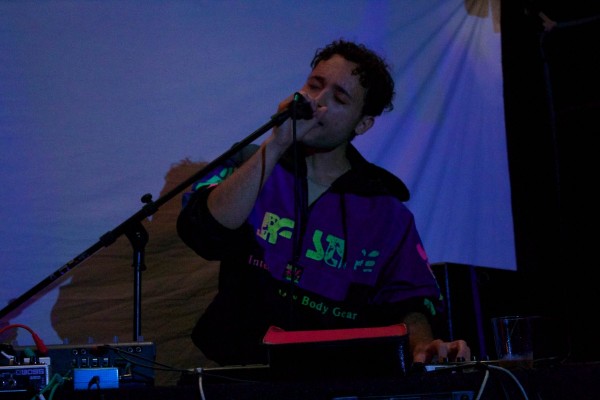 Melbourne based singer and songwriter Oscar Key Sung played a show at Glasslands Gallery on June 27th. In support of this stop on his North American tour were Brooklyn locals, Kodacrome and Monograms, the latter celebrating his debut EP release. To go along with all the synth, beats, and electronic rock sounds of our openers, TechNoir Visuals provided an eclectic array of futuristic and bright visuals to the party.

Oscar’s performance was splendid, delivering catchy hooks and enticing beats. A talented front man, he had a breakthrough after being handpicked by Mercury Music award nominee MC Ghostpoet and Brooklyn-based artist MeLo-X to produce their debut release. His debut EP release, Holograms, has the right amount of infectious dance floor beats and R’n’B clicks that put him on a good spotlight as a talent to look out for; Oscar definitely has a bright future ahead of him. “All I Could Do” and the single “Holograms” are two tracks of his worth checking out on his SoundCloud page.

Monograms preceded Oscar’s show. The project of local Brooklyn multi-instrumentalist Ian Jacobs, Monograms fuses elements of garage and psychedelic rock with electronic sounds and drum beats. He just released his debut EP Fader and fans of gritty sounding garage rock are encouraged to check it out.

Brooklyn based electronic synth pop duo Kodacrome opened the show with the kind of  raw energy they’re known for. Kodacrome is Elissa LeCoque (keys and vocals), and Ryan Casey (electronics, drums, synth). Their music is best describe as a happy medium between gritty and delicate. Elissa’s soothing voice and honest lyrics play along beautifully with Ryan’s intricate beats; together the pair delivers well crafted tunes that are easy to absorb and get lost in. You can check out some of their work here and be on the lookout for their LP release Aftermaths, later out this month.