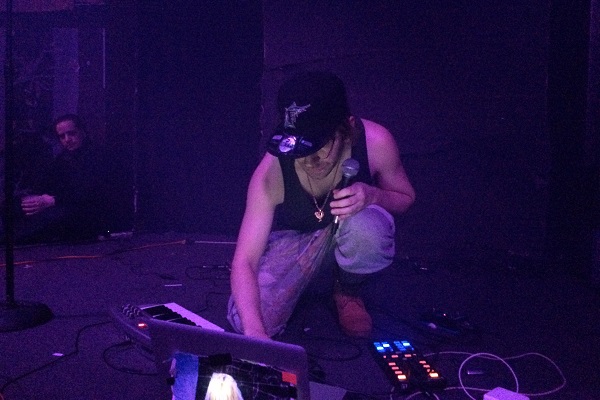 A night of dark electronica descended on Glasslands as Californian witch house pioneer oOoOO came by for a show. oOoOO released his first full length, Without Your Love, last year and has been playing shows here and there around it. His music has been a favorite of mine in that realm in the past few years, but live, I found him lacking.

I’ve never seen the Glasslands stage as empty as I saw it for oOoOO’s setup. He was alone save a laptop, a couple devices and mic, which he used sparingly. Much of what we heard from him this night came from backing tracks. He distorted the input, added some sounds here and there via a controller, and sang rarely. That level of engagement would be more appropriately billed as a DJ set. I was also disappointed to not even see any visuals or at least a female vocalist share the stage as past performances of his have had.

Tempers were on before oOoOO, and are a duo with a great sound. The sultry vocals from their singer sync in with a high-tempo guitarist. However, their suffer badly live via a dependency on backing tracked percussion. It felt quite at odds with the sound they are trying to cultivate. If it’s amended, they could very likely be a band to go out of the way for. We’ll see where they are in a year.

Ironically, it was the first act of the night, Vandana Jain, that felt the most complete on stage. Vandana is a singer and electronic composer whose music falls into a haze of downtempo synthpop. Live, the act transforms into a synth-heavy trio. The group packs a solid punch, and their set ending laying into an extended electronic jam was its highlight. Check out her debut LP, Anti Venus, which came out last year.