On the Beet with Wanna 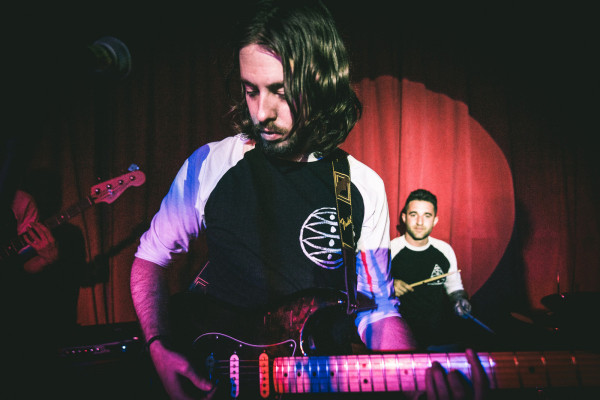 Wanna is an exciting rock outfit just birthed here this Summer. The four piece plays an upbeat, weird brand of indie rock that’s been convincing, and then some, at their live shows I’ve witnessed. Josh Mac, who sings and plays rhythm guitar, answered some of my inquiries. Dial in below for some background on them, their debut music video, and photos from their first live show. Their debut EP releases this Halloween.

NB: How did the four of you come together to create Wanna? Care to introduce all the Wannas?

Josh Mac: I moved over to New York from the UK two years ago, with a bunch of songs on a hard drive and an itching to start a band to play them loud. I met Andrew Panetta (drums) and Daniel Postilnik (lead guitar) at shows in the city. I eventually, creepily managed to persuade them into a dark corner and play them the songs from my phone. We pretty much started practicing the next day in their underground space in Bushwick. Andrew physically forced Vinny Martinez (bass) to come down to the room. We all properly clicked after that.

NB: Are there any lessons or experiences you take from your previous musical projects that you’re keeping in mind here?

JM: I used to drum in bands back home, but this time around, wanted to scare the shit out myself, so I decided singing and playing guitar in front of people was the perfect way to do that! As a band, we are all playing the wrong instruments to keep it slightly uncomfortable, but ultimately it’s about high energy, good times, and making friends. These guys are the coolest.

NB: What differences have you noticed between starting a band in England, versus starting one here in NYC? Are there significant differences between the music scenes?

JM: I’m from a peninsula surrounded by 3 sides of water called the Wirral. I started playing young, with my friends from school – so starting a band there was a case of getting together to create a vehicle to escape that place. The scene basically consisted of other bands so different from each other, but in the same boat (pun intended?). Although sharing the same three sides of water, NYC to me, is a completely different beast. Almost the opposite. This city has a magnetic force you can’t escape. Love it.

NB: The mechanism you used to promote the ‘This is Ridiculous’ EP (dialing in via phone to receive a new song each week) was quite anachronistic. What inspired you to take such an approach?

JM: One of our songs, ‘Maria’, is about a guy insanely obsessing over a repeat cold caller to the point of convincing himself this woman is romantically interested in him, and in turn will get married over the phone. So I thought it would be an idea to preview the EP through a toll free number, encouraging reverse cold calling. We call it the Wanna Cold Call Appreciation Society. I advise you call it (855-97-WANNA). Also a nod to They Might Be Giants. When I say nod… Total rip off. Ha!

NB: Is there an aesthetic to Wanna? We love that a lot of your promotional material features a rough, DIY design. Live, I see everyone garbed similarly, bearing what appear to be illuminati symbols.

JM: Design is a very important part of what we do, and we DIY all the way. I’ve been getting into Raymond Pettibon and Andrew Savage from Parquet Court’s stuff recently. Also, being a foreigner in this fair land, I thought it would only be fair if we visually represent ourselves as an alien-illuminati baseball gang. We have too many eyes. And each member has been allocated a symbol that reflects their personality.

NB: What influences can we see in Wanna’s music? Your Twitter is bursting with the hits of dozens of venerable artists under the hashtag #wannajukebox.

JM: We are into a lot of different stuff. The name Wanna comes from listening to a load of Ramones and realizing the word ‘wanna’ appears in a LOT of their songs. Then I realized that the word ‘wanna’ appears in pretty much every song ever. And then I realized that would be a good band name. Otherwise, we have been getting into Devo, ELO, The Cars, The Soft Boys, Half Man Half Biscuit, Ty Segall, Joan Jett, Richard Hell & The Voidoids, The Fall, Hot Chocolate, Kyu Sakamoto, The Coasters.

NB: Your video for “Maria” just premiered. What’s the premise to it?

JM: The director, James Hicks, is brilliant. He has worked on some great visuals for Franz Ferdinand and Clinic before which I loved. I told him about the toll free EP phone number thing which he suggested we go for a surreal, colourful mind melt of a lyric video based around phones. It abstractly follows the insanity of this guy falling for ‘Maria’, getting stranger and stranger as it progresses. We were talking about that mad tunnel scene in the Gene Wilder Charlie And The Chocolate Factory at one point. I think that’s where the maggots and snails came from.

NB: You’ve played two gigs to date, both at Bushwick’s Cobra Club. How’d you spin them? Got anything else cooking?

JM: We’re friends with a great band called Boom Said Thunder – they asked us to open for them, then through that, Cobra Club asked us back for our second show which was a Metal, Horror Burlesque BBQ. We basically left the stage to a blood soaked zombie girl being dragged onstage in a body bag. We are currently plotting and booking shows, with our next show coming up in The Trash Bar in Williamsburg on Saturday the 27th at 8pm. There’s an open bar an hour before we start – so it’s going to get messy FAST. Hopefully no blood. No promises.

This band is great! I 'WANNA' hear more too!