On the Beet With Via Audio 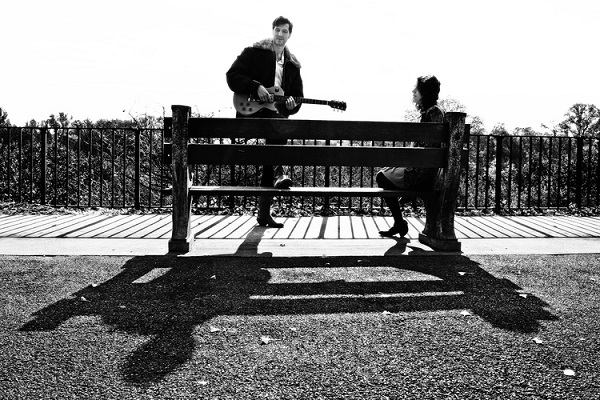 I spoke with Tom Deis and Jessica Martins, the duo behind Brooklyn indie rock band Via Audio, during their pre-SXSW tour. Our topics on this interview include the impending release of Natural Language, and their plans following its release. Come see their album release show on March 30th at Glasslands, and check out our premiere of “For Your Consideration” off the new record if you missed it.

Neat Beet: Tell us a bit about your current tour down to SXSW. Your band is mostly doing private shows, right? How did those come about and how is it playing them?

Tom Deis:  These shows came about for Via Audio when I called Elizabeth Ziman of Elizabeth and the Catapult.  We were both trying to book shows down to SXSW, and she said she was working on a house tour and would be happy to share it with us.  After our first show of the tour, we’re having a great time.  We’ve worked out an intimate set that we feel great about.  Also, Elizabeth and the Catapult sounds amazing.

NB: What is your live show’s composition like for this month’s shows? Who else will you be working with?

TD: We had thought about stripping down the lineup, but we feel that Via Audio is best served as a four piece.  So we have a great drummer and bassist with us.  Some of the quieter shows will be played a few feet from our audience with just a snare drum and acoustic guitars.  The official showcase will be a rock and roll show.

Via Audio at SXSW

NB: You are touring with Elizabeth and the Catapult and Spirit Kid. Can you tell me a bit more about them and your relationships with each?

Jessica Martins: We’re not actually touring with Spirit Kid, though we will hang at SXSW and he is opening the night of our record release show. Emeen (from the band) is a good old Boston buddy who is still making great music. Elizabeth is also a Boston buddy, who we met during our days at Berklee College of Music. We shared a drummer for a while (Dan Molad of the band Lucius, who also produced our new record), are still performing in the same musical circles, and were both traveling to SXSW, so it made sense to tour together.

NB: Your record release show at Glasslands is currently your last listed date, what plans do you have following that show?

JM: We are working on a west coast tour for the end of April, and will see how the record fares and go from there. We anticipate to do more touring and work with more people we respect on more records, but because we don’t really have a team behind us anymore helping with booking and management, we can’t really predict what will be possible in the future. We can only hope our fans and friends keep helping us spread the gospel!

NB: Glasslands has been promoting shows lately with custom mixed drinks for some nights. What would Via Audio’s be?

JM: We have no idea what Glasslands will promote, but perhaps it can be The Tom Deis, a drink Tom Deis invented consisting of Triple Sec, pineapple juice, vodka, with a splash of cranberry juice. A great way to get drunk!

NB: Can you give us some insight into the challenges you faced with Natural Language? You funded it via Kickstarter three years ago and are releasing it independently; I imagine that there are some stories to be told there.

TD: Yeah, we had a hard time releasing Natural Language… we had made this record that we love, but had no obvious next step because every label we shopped it to said they liked it, but couldn’t help us release it. So we kept playing local shows and stayed active doing other musical endeavors, but were afraid to go about self-releasing the record incorrectly business-wise. Now, we are happy to be truly independent, and we are just going to do everything we can with this self release.

NB: What influences did you draw from for Natural Language; have they changed at all from when you first started Via Audio?

TD: Natural Language is an album where we present a different side of ourselves. The lyrics are influenced by feelings we get from the natural world. The music is meant to be more of a thick environment than before. Melodically, we have been maturing. We’ve been trying more and more to make each note count. I’ve always looked up to Yes and Radiohead’s style of melody and I’m sure that shows a little in the songs I write.

JM: I feel that Tom and I really listened this time around to each other’s songwriting styles to create the most cohesive record we’ve made yet. We also enlisted our original drummer Dan Molad to produce the record, which felt nostalgic, familiar, and comfortable, but completely new at the same time, being that we have all matured so much musically since starting the band 12 years ago.

NB: Do you have any philosophies you would impart on musicians starting their journeys today?

TD: I would say that anywhere you get with music is worthwhile. If you take a tour and play to just a few people every night, those people are likely to be really cool. A tour is one of the most fun vacations you can have.

Tagged: elizabeth and the catapult, independent, spirit kid, via audio