On the Beet With Stereo Off 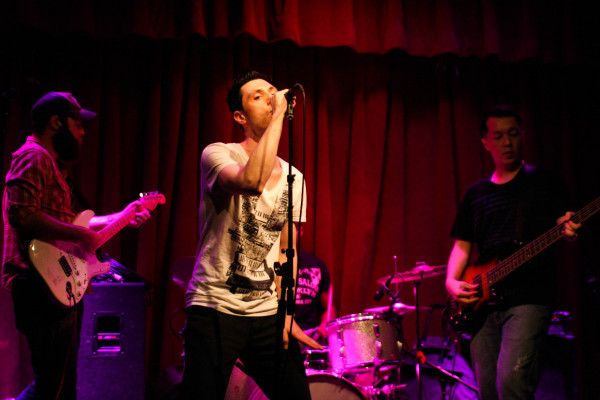 I recently caught a gig from Brooklyn electronic-rock band Stereo Off over at Williamsburg’s Spike Hill. The energy and musicianship exhibited in their set was more than convincing enough for me to turn over a few stones and learn about their plans and motivations. The five piece has been kicking it for two years, having just recently released their first EP, and have a lot more in store for us as they vie for fame and fortune. Stereo Off is Sebastian Marciano (vocals), Steve Williams (lead guitar/backing vocals), Niall Madden (bass/rhythm guitar), Darren Jones (drums) and Bridget Fitzgerald (keyboard/viola). I would wind up conversing with Sebastian and Niall for the following interview.

Neat Beet: Since we’re celebrating birthdays tonight, could you tell me a bit about how the band has changed in the past two years? (Sebastian Marciano’s b-day was celebrated at the gig, and the band’s imminent second anniversary was also mentioned)

Niall Madden: It’s definitely evolved quite a lot in the two years. At first, the tracks had a raw edge but were quite isolated in some ways – where as now, the set and the songs flow together a lot better and we are starting to really have our own sound and style, one that’s also polished as we incorporate more instruments and layers going forward.

NB: You mentioned that you all come from different musical backgrounds, how does that help create your sound?

N: It definitely helps make the sound unique. Sebastian has more of an electro and hip hop background, while I have a more indie rock sound, so its a great mix of detail in the songs, mixed with a rawer edge. This tends to be where most of the riffs and songs originate, but then from that sound, it gets polished up and pulled into different styles.

Sebastian Marciano: For instance, Steve is more of a bluesy rock guitarist, while Bridget is classically trained at Julliard but is into experimental electonica and rock. It’s a recipe that seems to also allow a lot of interpretation by the listener.

NB: What are the influences for Stereo Off with such backgrounds?

S: A lot of classic rock and 80s bands, as well as electronic and dance music.

N: I was raised on many a 90’s and 00’s indie rock band, plus some punk bands such as The Clash, to recent bands like the Foals and Arctic Monkeys. Lots of UK influence from the years living there, I guess.

S: Some of the punk influences show in Niall’s riffs and then vocally, I think the post-punk echoes of Joy Division and others were instilled in me but indirectly, later on by Tears for Fears and Depeche Mode. Then of course there’s Prince, Cameo, Genesis, Hall & Oates…so while these are not similar, they do speak to me in ways that lead me to newer bands I’m a fan of, such as Miami Horror, Van She and others.

Various bands got me into guitars in general, but its the producers like Dungeon Family, Daft Punk, Justice that made me get seriously into guitar tone itself. J-Dilla and DJ Premier are masters, and of course all the amazing teachers and friends we’ve had the privilege to make music with.

NB: Can you tell me about your upcoming releases and any themes you may be working with?

S: It’s musically thematic but not conceptually. This one is a bit different from the first but in many ways still part of introducing ourselves. We recently chose the songs for the second EP and some of the third; some of the newer songs are a more electroclash or synthpop sound, and there are definitely a couple of tracks that will rock.

NB: Where will you be recording the new EP?

N: Like the first one, we will be doing it in true DIY fashion in our own studio. We’ll also aim to get another video for one of the songs on the second EP, also done by ourselves along with our friend/director Justin, since the video for Bullet Time on the first EP has received great feedback so far. (The video will be at the Coney Island Film Festival on 9/20 & NYC Indie Film Festival on 10/16).

NB: Where can we catch you next?

N: Our next show is on Thursday, September 18th at Trash Bar in Brooklyn. Then we’re doing CMJ in late October which I’m definitely looking forward to. (Rockwood Music Hall, 10/25)