On the Beet With North Highlands 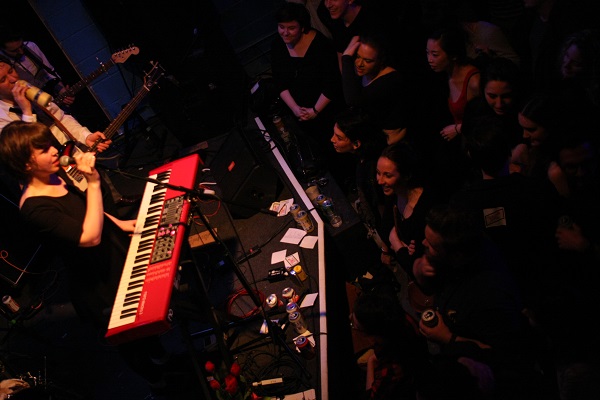 Cycle back nearly a year to our coverage of Brooklyn quintet North Highlands’ breakup. We were mournful then, even though they played an epic, final set at Glasslands before their singer, Brenda Malvini, departed New York City. This month, the band re-emerged to posthumously deliver their promised second album. They were also kind enough to grant us an interview about what they’ve been up to and to share some anecdotes and wisdom. Check below for that and a stream of the record.

Neat Beet: Brenda, has sort of itinerary has your wandering taken so far? Overall, are you happy with the decision and optimistic about the roads not yet traveled?

Brenda Malvini (vocals, keys): As of right now, I’m in Chicago. My partner is in grad school and I wanted to give it a shot. Overall, I’m pretty happy with my decision, though I really miss my friends and bandmates, hiking around the city and eating nachos at The Commodore. I thought I was tough enough for a Midwest Winter, but as it turns out, last year’s polar vortex broke my spirit (Andy, you were right.) Also, the job market here is tough and for some reason I’m still very homesick.

Next on my itinerary is Sacramento, California, where I will find a place to stash my keyboards, spend some quality time with my family and figure out my next move. From there, I’ll probably head to the Bay Area to work, save up some money for a car and then another move either to LA or Portland (I’m very torn on this one.) I’m going to try for a long distance romance with my guy, which should make for some pretty good songwriting, I hope.

And yes, I am pretty optimistic about things. I have to be, because otherwise I’ll freak out (I literally bought my plane ticket last night.) I guess I’ll keep on moving until I find a place that feels like home and is a relatively close drive to my family. It’s going to be a very interesting year.

Neat Beet: Did y’all do anything special on the day of your final Glasslands show? Was that the last time y’all were gathered together?

Daniel Stewart (violin, guitar): It was pretty much like any other show, but we were allowed to play a long indulgent set, and we were thankful to have so many of our close friends there.  That night Brenda, Mike [Barron (guitar)] and I closed some bar in Greenpoint where we spoke wistfully about the good old days, wondering if we made a huge mistake.  We’ve all seen each other since then.

Brenda: I spent the day alone practicing my parts, and had a good cry. It was good way to get my head right for the show. Our last time together was actually a listening party we threw for the record the day before I moved, even though it wasn’t totally finished. It was amazing to be surrounded by all our friends. The best part about it was that there were so many people there that you actually couldn’t hear the record. You had to go listen to it in the bathroom and that bathroom smelled like shit. Such a good note to end on.

Neat Beet: What made you choose to close out your last performance with “Collarbones?” Does that song hold any special meaning?

Jasper: It was the first song Brenda brought to the table, and for us, when we all played it together for the first time, there were chills.

Also, we have a good friend who screams, “Collarbones!” at every show, so we threw that punk a bone.

Neat Beet: Is there any chance of us seeing The Sugar Lips EP join the rest of your discography on Spotify? [“Collarbones” & “Sugar Lips“]

Brenda: Oh man, we recorded The Sugar Lips EP super DIY in our friend’s basement in 2009 (thanks again, James Clark!!!) I think we’d have to track down the files. I actually didn’t even think to put it on Spotify; I’m terrible at the internet and will have to get back to you on that one. Since you asked for it, we’ll try and get it up there.

Neat Beet: What were your favorite performances? Do any stand out as particularly cathartic or bizarre experiences?

Jasper: I think the most bizarre show we played was in Cincinnati, during the Midpoint Music Festival, in which we played a Segway dealership showroom. We all got sick from a million chili bowls.

Daniel: Yeah, we were also afraid to leave our gear in the van there, so we brought all of it up to the hotel room. We were beat. It was after a 16 hour drive from NY. We had a parking ticket in the morning.

Brenda: My favorite performances were always college shows. Kids are always so down to dance, and talk to you and ask you for life advice for some reason. They really make that long drive worth it.

That Segway show was definitely the most bizarre, I felt like I was trapped in a David Lynch movie. I couldn’t hear the drums and Jasper was right behind me. That’s the thing about touring is that you’ll have an amazing show one night and then the next night you’ll play a Segway dealership…. and all of it is awesome.

Neat Beet: What took North Highlands so long to release following its recording in 2013? What went into finalizing the record once you all were scattered to the four winds?

Jasper: Matt Marinelli, our intrepid producer and mix engineer, volunteered on this record. We couldn’t be more appreciative for his work and dedication.  Most of the work on this record was done after hours, and with that being the case, we didn’t have a specific timeline.

Daniel: We had no strict timeline to follow, our plan was to just continue doing overdubs and mixing until it was done. It became tricky to find the time. There were periods when we were more or less inspired to collaborate on its production, but the record was finished by the time Brenda and Mike moved away.

Neat Beet: Any feasibility of us seeing a music video from North Highlands? If so, any spoilers you can offer us?

Jasper: I wanna make an iPhone video, one take, of me, dancing. But, I need someone to hold the camera phone for me.  Does anyone want to do that?

Daniel: We’ve been throwing around some ideas.

Neat Beet: Which artists now have your attention? Who’s doing it right? Who has everybody dancing?

Jasper: Mac DeMarco has my heart.  I love that he doesn’t follow any trend, and just creates whatever the fuck he wants.  He’s super genuine and everything he releases is solid gold.  I’ve also gotten pretty into TOPS.  Lots of great melodies in there… the vibez are strong.

Brenda: For me, Father John Misty. I just recently started listening to him and every time I do, I manage to either trip or fall on my ass because I’m just listening to him so hard. Also, Chicago is just one effing sheet of ice right now, so there’s that. I was listening to him recently while walking to work when a car drove through a puddle completely covering me in icy street water. I cried in front of a Forever 21 listening to “Nancy From Now On,” and then I laughed and dragged myself to work.

Neat Beet: Do y’all have any thoughts on the conclusion of Williamsburg’s Kent Avenue scene? How does the music scene in Brooklyn today compare to what it was when North Highlands was just beginning?

Jasper: Call a spade a spade, you know?  While I love that people are vocalizing their frustrations about the demise of the KENT AVE scene, we can’t blind ourselves to the fact that this has happened everywhere (at least in NYC.) Soho is a mall now. CBGB is where Anthony Bourdain buys his leather jackets. And Glasslands will be the VICE cafeteria; I think the scene has just shifted a bit.

I like Baby’s All Right as a good ‘pro’ medium venue, as well as Cameo Gallery and the Palisades as good small/medium venues. Silent Barn is still an incredible DIY venture, and I think as long as the creative youth exist locally, some sort of scene will be available. Things change, I say move on and enjoy the next thing.