On the Beet With Meadowhawks 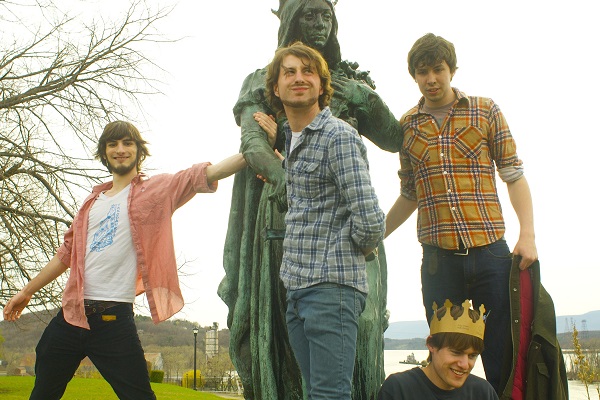 Meadowhawks are a brand new musical project out of New York state. The rock quartet’s debut, Meadowhawks EP, releases today and is available for streaming below. It’s a four song offering that bursts with energy with lead track “Multiflora Rose” before mellowing out into some comfortable rhythms. Ryan MacLean helms the project, who we spoke with at length in interview as a way of getting the best possible introduction to the band. Their NYC debut will happen on September 12th at Williamsburg’s Trash Bar.

Neat Beet: How did Meadowhawks come into being?

Ryan MacLean: All of us in the group studied music at Bard College together. There was this communal quality to the music scene there where all the musicians extended a hand to anyone else who needed it regardless of genre. We always found ourselves playing in various projects together, but nothing was ever concrete. When we had graduated and I was working a full time job last fall, I had the epiphany that something long-lasting needed to be done with all these connections that were suddenly fading away. When I’d saved up enough money, I booked a string of dates in the studio and spent hours in my basement just writing.

RM: Dan Vernam was one of the first musicians I met at college and we’d built up a musical relationship for five years playing in everything from rock bands to jazz ensembles. He lives in Berkeley, CA now, but he agreed to come out and do the session with me over the holidays. In the middle of those sessions, I called up my friend Nate Smallwood to play guitar on one of the tracks, so in a way the band was kind of being pieced together gradually as the creative waters came to a boil. The two pieces missing however were somebody to take Dan’s place after his return to the West Coast and a drummer. After the recording, our friend Quinn Murphy took over on bass, and Lucas Henry joined as our drummer so we could start playing live. Dan still plays with us whenever he’s on the East Coast though. Looking at our lineup now, its really a conglomeration of the elements that made our music scene so unique.

NB: What’s the origin of your name?

RM: If you want the literal interpretation, a Meadowhawk is a kind of dragonfly. Its the dichotomy of the word that sums up the band though. The word “meadow” is elegant and serene, but a “hawk” is an aggressive predator. Our music has elements of both elegance and aggression, sometimes in the same song. One moment, you’re sitting in a field and the next, a falcon has dove on you at 200 mph and knocked you flat. I also find that this band’s music and lyrics seem so much more rooted in nature than urban life, so in that sense the name fits us.

NB: What musical inspirations does Meadowhawks draw from?

RM: On the outset, we’re a guitar-driven rock group, but we’ve been exposed to so many different areas of the musical stratosphere that its impossible for anything to be excluded. We all grew up on rock’s family tree, listening to The Who, Pixies, Pearl Jam, My Morning Jacket etc, but we opened infinite doors by studying jazz and world music. Groups like Mahavishnu Orchestra and King Crimson were big influences in my college years. Those groups combined the power and energy of rock music with the vocabulary and experimental uncertainty of jazz to make something so explosive and emotional. Since we have played in so many different musical settings, we also gained a lot of knowledge in everything from R&B, Hip Hop, Classical and Latin Music. We’ve also taken Samba drumming classes and learned Brazilian rhythms that you can’t find very often in a music textbook. With all these fragments combined, we put them together in a way where its refreshing and connectable. We know that we have a large musical vocabulary, but present it in the most grounded and punk-rock attitude as possible.

NB: How was the recording process at Clubhouse Studios?

RM: I had recorded at the Clubhouse before with others and I had also interned there so I was already quite familiar with the environment. I’ve watched The National, Earl Slick (David Bowie/John Lennon guitarist), The Bad Plus, Garth Hudson (The Band) and countless others record there and with each artist I was able to hear first hand just how phenomenal of a live room that studio has. The studio was built around a 19th century barn, and while the studio itself is only 14 years old it has that quality of a spacious room that’s existed for a century or more. So above all, we wanted the sound of our EP to capture the sound of the environment as much as possible. We made sure that room mics were prominent on all the instruments and vocals in order to bring out the sonics of the room. In today’s music production world there’s such a heavy emphasis on removing pretty much all the qualities of the room the music was recorded in. To us, the quality of the space that the music is made in is just as important as the music itself. If these qualities are stripped away, the music isn’t being done enough justice.

Dan and I went in just a couple days after Christmas last year when it was about 20 degrees out. So it was pretty much the perfect time of year to live in a barn in the woods for five days, working from dawn until dusk. We tracked bass and drums first, followed by Dan’s backup vocals and piano parts since he had to catch a flight back to Cali. I did all the guitars, keyboards and vocals after that. After the initial session, I came back a couple weeks later to add some overdubs and track one last song, “Apologetic Infinitum”. All the instruments you hear on the EP are analog, including the keyboards. The studio has an amazing selection of vintage amps, drums, keyboards and a gorgeous Neve board; I tried to find use for as many tools as possible that could make the music sound authentic and human. We did record into ProTools and added a few vocal effects in it, but we put the final mixes onto 1″ tape, which was a lifesaver.

NB: What will be your plans following the Meadowhawks EP release?

RM: We’re still in the process of editing our music video for the song ‘Multiflora Rose’, which was filmed by our friend Nick Cusworth at a show we played up at Bard College. That should be out around July 20th when the EP comes out. Once its out we’ll be embarking on a steady string of dates throughout the Northeast starting at the end of August to promote it. We’ll be in New England on Labor Day weekend, followed by Philly and a festival in Hastings NY the weekend after that. To top it off though we’re doing a show at The Trash Bar in Brooklyn on September 12th, which we’re really looking forward to.

For a lot of these shows, we’ll be sharing the bill with a band from LA called The Canyon Rays, who we also knew from college and are buddies of ours. As of now I don’t know what to expect from the shows, but I know it’ll be alot of loud guitars, energy, sweat, dancing and maybe spraying the crowd with supersoakers filled with champagne? Above all, I’m really looking forward to establishing this group as a live act and letting that shape whatever the future of Meadowhawks might be. Looking beyond all this, I hope this band can establish a reputation for being a band that stays true to its musical integrity and artistic morals.