On the Beet with Kodacrome

By Harrison June at 8:30 AM, Jul 29th, 2014 in Interviews
Alex Burgos - Ryan and Elissa of Kodacrome in performance 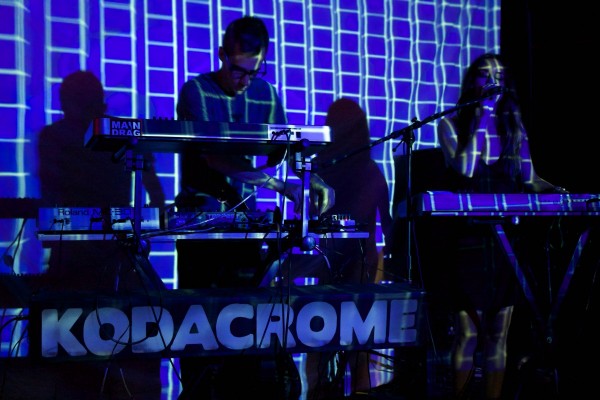 Kodacrome is a Brooklyn electronic duo of Ryan Casey and Elissa LeCoque that have been active on the concert scene here for a few years. I caught up briefly with them to get some background on who they are and what their band is all about. Today is a very big day for the group, with the release of their first album, Aftermaths, and a release show at Glasslands with Kodomo. We’ll be there, consider coming out to join us!

Neat Beet: How did Kodacrome come into existence?

Ryan Casey: Elissa and I had been working with some of the same people and met on tour. She was performing solo and I was playing in a band here in Brooklyn called Madame Psychosis. I enjoyed seeing her perform and asked to produce a couple songs for her. We both liked the results and the collaboration turned into Kodacrome later that year.

Elissa LeCoque: We clicked immediately, I think a lot in part because our strengths and weaknesses really compliment each other. Ryan is a visionary, and I needed that.

NB: How did each of you find a passion in electronic music?

R: I started out mainly producing hip hop, but I was into electronic music from a young age. Chemical Brothers, a lot of Ninja Tune stuff, and experimental artists like Wendy Carlos. I’d say Autechre and Radiohead – specifically Kid A, really inspired me to dig deeper into producing electronic music.

E: I have always listened to many genres of music, and have a pretty big collection of indie folk and classical music on top of my electronic stuff. It all is important to me, and I think good songs can be translated between genres. But the more time I spend with real synths, the more I appreciate an amazing tone, and learn how to write specifically for specific sounds. The piano is my first love, but I am always trying to expand, and figure out how to let the instruments inspire.

NB: How does the songwriting process work between the two of you?

R: Elissa usually begins the writing process. I give her space to write alone on the piano. But occasionally I’ll come up with a part or drum loop and send it her way and see if it triggers something lyrical. For the most part though, E writes sketches and gives them to me to start arranging and producing.

E: When we first started making music together after that tour in 2010 (when I was living in San Francisco, and Ryan was in Brooklyn), it was surprisingly easy to make music together from opposite ends of the country. Interestingly enough our workflow is still informed by that initial limitation. We like to look at the process as sitting on an egg. We take turns!

NB: How does The Perla EP, your first release, relate to Aftermaths?

R: We were still finding our sound during Perla. That record ended up sounding pretty “rock” in comparison and much more aggressive. We worked with a drummer and a couple guitarists, and I played drums and guitar as well. Aftermaths was a more insular experience and much more minimal approach. With Perla, we wanted to record anything we felt added to the song and elevated the production. With Aftermaths, it was more subtractive. We cut everything that wasn’t absolutely necessary.

E: I find that it takes confidence to cut back the frills and present the core melodies of the song, and Ryan has really encouraged me to get to that point. I’m still proud of Perla, but I am happy with the process of discovering our current sound, and happy with where it has arrived.

NB: A lot of your lyrics seem to deal with nature and animals. Can you describe what inspires the topics of your songs?

E: I usually like to write very specific stories about different things I’m learning/reading about, and last year I was on a science binge at the library! We also wrote half of this last record while living on Martha’s Vineyard, so we had some run-ins with some formidable creatures that couldn’t be ignored.

NB: What themes are there to Aftermaths?

E: The whole thing has a watery, dripping, sometimes stormy feel to me. The stories within vary, but that is the thread that binds it all together in my mind.

NB: How did you get to partnering with and remixing Kodomo for your joint release shows?

E: We met through a mutual friend, and instantly really appreciated each other’s music. I love his affinity to not only apply himself to inventive and striking production, but also write really catchy and emotional progressions and lead lines. I would listen to his music if I didn’t know him!

NB: How did you sync up with Technoir Visuals on your live shows? I’m a pretty big fan of the visuals he’s been outputting at your past gigs.

R: Technoir is my friend, Ismael Medina. We used to live in the same building in Bushwick years back. He’s a producer, DJ, photographer etc. He’s a super talented projectionist and has been getting his name out quite a lot recently. He’s done a few shows for us and everything had been improvised so far. Hopefully we’ll plan out a more concrete visual soon.

NB: What plans do you have following the release of Aftermaths?

R: We’re excited to catch up on sleep and start writing new songs. It’s always a strange void after completing a record and I feel it’s best filled with writing and experimenting. Some sort of proper vacation would be nice but easier said than done.

E: I’m already so excited for the new songs! That’s the weird reality of releasing an album. It’s almost like an anti-climax because the release process takes so long, and has so many steps. We’ve been done with Aftermaths since January, and I’ve already gotten a good start on the next collection of songs. But it will definitely feel good to finally get this one out of the nest and into the world!