On the Beet With Japan Soul 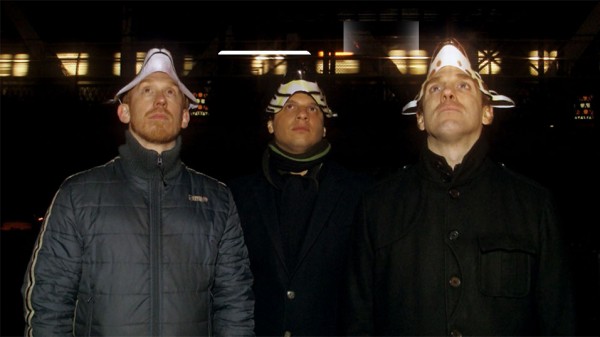 Japan Soul is an exciting art-rock quartet from Brooklyn who are releasing their debut LP, Plastic Utopia, next week. They’ve caught my ears with their groovy sound and my eyes with their science fiction vibes. I talked with Jason Paul and DaVe Lipp of the band. Wind down your Friday afternoon with an advance stream of their album, and learn about the inspirations and aspirations of the artists who created it.

Neat Beet: Can you introduce yourselves and describe how you came together to form Japan Soul?

Jason Paul: I’m Jason Paul. In the mid-00’s, I was in a punky band called Music For Girls and we were quite fond of a group called The Vitamen. We eventually played a few shows with them and became friends. Both of these groups dissolved and I ended up fronting a band with all 3 of the Vitamen, including David Rozner who brought in DaVe Lipp on sax (who was part of The Vitamen’s horn section). We actually did put out an album but that group got put on hiatus because I went traveling for a year. On return I played bass alongside David Rozner on drums as the live band for Kent Odessa. I started writing new material and DaVe returned to the group. Here we are 2+ years after beginning again. Plastic Utopia is the collaboration of the three of us.

DaVe Lipp: I was playing sax with an awesome, but now defunct band called The Vitamen who were friends with Jason’s previous band Music for Girls. After The Vitamen broke up, they weirdly ended up in Jason’s next band Japan Seoul (previous incarnation of our current band. Note the spelling!). We put out an album, but had anywhere from six to eight people playing shows. It was nearly impossible to get everyone together to play a gig live! Fast forward more than five years after breaking up, and Jason and I, along with The Vitamen’s David Rozner, started working together on songs for fun, which quickly turned into an album’s worth of material. The sound is completely different from our previous version of Japan Soul.

Neat Beet: What inspirations would you cite for Japan Soul?

DaVe: I think we all share a common love of Roxy Music and the weirdness they put into pop music. Brian Eno, Jazz music and improv from the likes of John Coltrane, Thelonius Monk, Charlie Mingus, Eric Dolphy, Ornette Coleman, Iggy and the Stooges and the sax work of Steve Mackay, David Bowie. I’ll stop there.

Neat Beet: Plastic Utopia is described as an artistic protest album set in an alternate reality. Can you tell me more about its themes and ideals, and what they mean to you?

Jason: The lyrics reflect where I was. I didn’t contrive to write to those themes. But watching masses of people willfully migrate their private psyches onto “the cloud”, which are being catalogued and surveilled by spy agencies — to a backdrop of impenetrable apathy and environmental collapse … I guess it just got to me. It seems like we’re living in an apocalyptic sci-fi novel. In my heart I’m just trying to reach a kind of euphoric abandon, a spiritual place, with the music. Great hooks that you can dance to and lose yourself in. But, given a blank page to write lyrics, the stuff I think about all the time just came through. It’s probably a strange dichotomy of what I think is really enjoyable, moving music to this landscape of troubling global observations in the words. I started out studying to be a painter, and music has really taken the place of that. The music is art to me.

Neat Beet: Your music video for “Hey Yeah Hey” features interpretative dance versus drone surveillance. Can you elaborate on how it was produced and how it ties into Plastic Utopia’s concept?

Jason: That’s really the brain-child of director Christopher Arcella. He was in Paris and took up with these experimental dancers and decided to put them all in the video. He’s also quite concerned about surveillance. So much so that he wrote a novel called deviations which I read and was floored by how much insight he had into where our ambivalence to surveillance and drones is going to take us.

Neat Beet: What plans do you have for your live show and composition?

Jason: David Rozner, who was the lead producer/arranger of the album, is moving on to continue his work as a producer. DaVe and I tried to convince him to stay on for the live entity, but he’s off to share his immense talent with other artists. We’ve very recently enlarged to the group to include Tyler Graham on drums and Matt McMurry on synth. DaVe is rotating live on bass, sax and guitar while I’m focused mainly on vocals and guitar. It’s coming along great and we’re really excited to play these songs live. We’re planning to move forward as a foursome to record new material as there’s still dozens of songs we’d like to share with the world.

DaVe: Since finishing the album, we have been in the studio constantly trying to figure out how to perform the material live. It’s very complicated, but with the addition of Tyler and Matt, we’re going to bring the songs to life while leaving room for some improvisation. The live set will be lot’s of fun. No drones live though or maybe there will be? We’ll see.